EghtesadOnline: Stocks and corporate bonds may be the surprise big losers once the Federal Reserve starts reducing its $4.5 trillion balance sheet.

A committee of investors and banks highlighted that outside risk in a presentation to Treasury Department officials this month. A week after that, strategists at Morgan Stanley separately warned that investors are underestimating the trouble that the Fed’s plans could bring to corporate debt markets, according to Bloomberg.

Money managers don’t seem alarmed so far. Stocks have gained 10 percent this year, including dividends, while corporate bonds are up 4.8 percent as of Friday’s close. Both Treasury debt and mortgage bonds, the securities most directly influenced by the Fed’s plans to reinvest less money, have lagged the broader U.S. bond market in 2017, although their returns tend to be more stable.

The threat to the stock and corporate bond markets underscores the bind that the Fed is in as it tries to scale down the extraordinary stimulus it gave the economy during and after the financial crisis. Its quantitative easing program has more than quadrupled its debt holdings, and Fed policy makers plan to start slimming down those investments soon now that the economy is on more solid ground. But cutting back could hurt markets and perhaps the broader economy in ways that are hard to forecast.

As the Fed contracts its balance sheet, “all we can do is hypothesize what the paths are because this is unprecedented,” said Joubeen Hurren, credit fund manager at Aviva Investors, which managed $456 billion as of June 30. 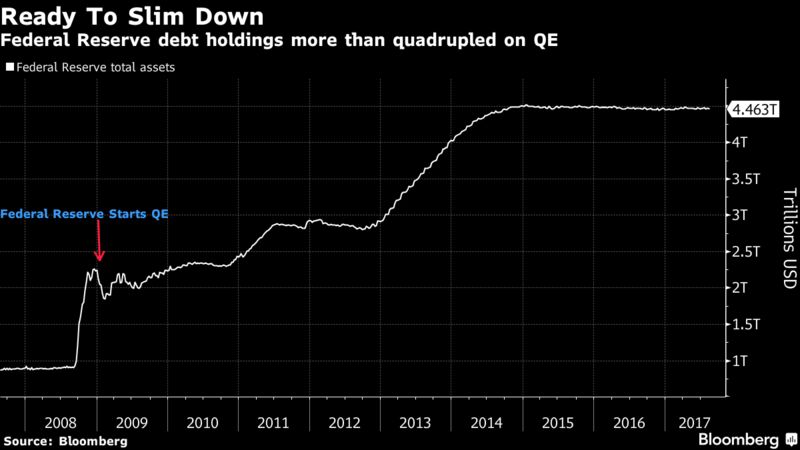 Companies’ borrowing costs, for example, might rise by 1.35 percentage points relative to Treasuries, according to the committee’s presentation to the Treasury, and those higher funding expenses could weigh on stocks. The European Central Bank is considering further dialing down its quantitative easing, which could add to the pressure.

After years of the central bank stimulus, signs of froth are everywhere. On the debt side, U.S. high-grade companies have already sold about $1 trillion of bonds this year, and are on track to break last year’s issuance record. Junk bond yields, at just 5.8 percent, are near all-time lows. In stocks, U.S. markets are close to record highs.

The Fed hasn’t been buying corporate debt, but as it snapped up Treasuries and mortgage securities, bond yields broadly fell, making it cheaper for companies to borrow. Corporations have often used the money they raised to buy back shares, buoying the stock market. That’s what worries a group of investors and banks known as the Treasury Borrowing Advisory Committee, which counsels the government on its funding and the economy.

“In an adverse scenario, there’s the possibility of a meaningful, but not systemically risky, decline in both credit and equities.” Cummins wrote in the Aug. 2 letter.

The committee’s presentation characterized declines in risk assets as a “financial engineering shock.” The group, whose members include JPMorgan Chase & Co., Goldman Sachs & Co., Citadel LLC and Pacific Investment Management Co., saw that scenario as a “tail risk,” meaning it is possible but not probable.

Former Fed governor Jeremy Stein doubted that the central bank’s balance sheet unwind on its own would trigger a big sell-off in corporate bonds. Cutting back on quantitative easing is designed to be a gradual process. But the securities’ low risk premiums, or credit spreads, are still a concern, he said.

“When credit spreads are unusually narrow -- as they are now -- that can be worrisome,” said Stein, now a professor at Harvard University. Generally, that scenario is followed by widening spreads, credit contracting, and economic growth slowing, he said.

The growth of exchange-traded funds and mutual funds tied to corporate bonds could amplify pain in the market for company debt, Stein said. When trouble comes, retail investors are more likely to bail out, sending prices even lower. The Bank of England highlighted that same concern in a paper last month. Writing in the forward of the report, BOE executive director for financial stability Alex Brazier warned of a “feedback loop” between corporate bond price falls, fund redemptions and asset sales.

At some point, markets will test the Fed’s determination to continue withdrawing stimulus, Morgan Stanley strategists led by Adam Richmond wrote in an Aug. 9 note to clients.

“We think investors underestimated the tailwind from QE in this bull market, and they are similarly now underestimating the headwind from reverse QE,” the strategists wrote.