EghtesadOnline: A Deutsche Bank economist has found a way to gauge how concerned Mario Draghi might be about the euro.

As Mark Wall points out, the ECB president has commented rather sparingly on the currency swings since he took office in 2011. While his predecessor Jean-Claude Trichet gained some notoriety for calling out currency appreciation as brutal, there was no mention of the exchange rate at roughly 60 percent of Draghi’s press conferences following Governing Council meetings, Bloomberg reported.

Yet the 69-year-old Italian has developed a signaling system for currency markets and his appearances in Lindau, Germany, and Jackson Hole, Wyoming, on Wednesday and Friday might offer him a chance to deploy it after the currency’s almost 12 percent gain this year.

“If he needs to say something, of course he will – but given where the economy and markets are, he does not need to go against the Council’s wish to avoid pre-committing,” Wall said. “That does not stop him from perhaps playing with the spectrum of rhetoric that he has used over the years, which has been a graduated sentiment of what the currency means to the economy.” 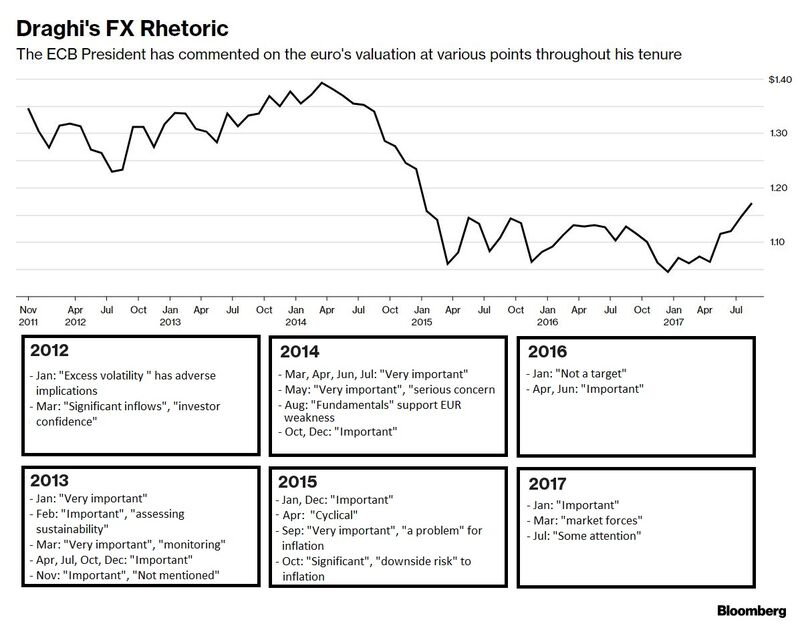 That spectrum ranges from what might be characterized as benign neglect to Draghi talking about “excess volatility” in the style of Trichet. And because this system is already in place it “could be quite easy for him to just use it in an almost throwaway kind of way,” Wall says.

So what are the words to look out for when Draghi steps to the podium this week?

He could always play it cool – say the euro is being driven by the forces beyond his control and leave it at that. Going further by describing the exchange rate as being “important’’ for growth and inflation would point to his awareness of the problem, Wall says.

But there is way to ratchet it up if need be.  Draghi could call the currency “very important” for growth and inflation, although in the past that usually happened when the euro was around $1.30 or higher, Wall says.  The ECB president could also talk about “serious concern” for inflation and frame it as an issue that “will have to be addressed” as he did in May 2014.

But to telegraph real stress, Draghi would have to use the phrase from October 2015, when he characterized the exchange rate as having “significant” consequences for the economy, including the “de-anchoring of inflation expectations.”

That would be something of a nuclear option as the euro-area economy looks different these days.  After all, Draghi said in June that reflationary forces were at play and hinted at the possibility of paring down stimulus, the very comments that sparked the current euro rally.

So what would be Wall’s advice to Mario Draghi? First, don’t overplay the reflation argument.

“He also needs to remind markets that the exit itself is contingent on orderly and supportive financial conditions. It would help to achieve the necessary balance in this if he mentioned FX as `important’ to growth and inflation. He would be picking a word out of his spectrum that we understand. It means neither ambivalence nor concern about the currency, but something in between.”