Here's How the Euro Is Likely to Fare Against World Currencies

EghtesadOnline: Don’t get distracted by Thursday’s ECB-driven slump: the euro has been redrawing the global currency map on its journey to multi-year highs.

No wonder policy makers are starting to fret. Even after today’s declines, Europe’s growth story and the prospect of scaled-back monetary stimulus has sent the common currency 11 percent higher against the dollar this year to near the strongest since 2015, according to Bloomberg. 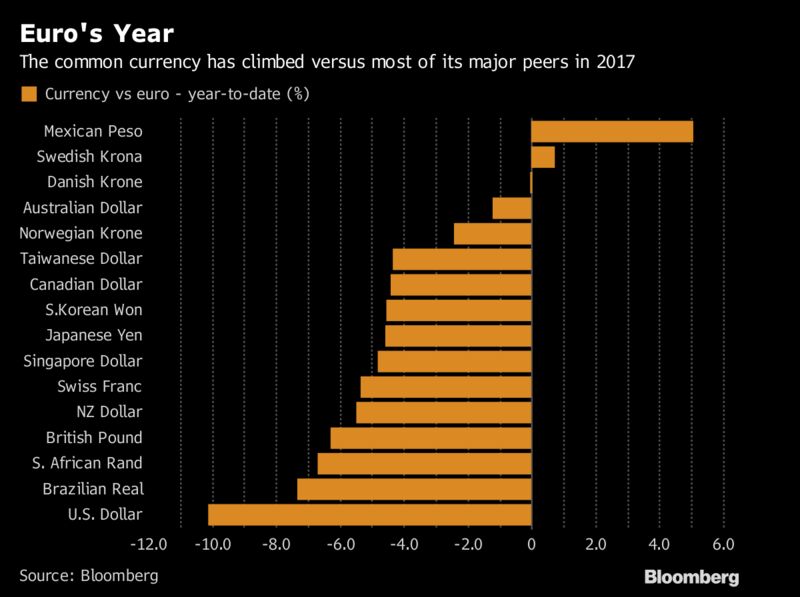 The euro has strengthened against 26 of its 31 major peers, with only the Mexican peso, the Czech koruna, the Polish zloty, the Hungarian forint and the Swedish krona withstanding its advance.

This is how analysts see the common currency stacking up against some of its major peers in the rest of the year:

The greenback has been outperformed by all but two of 31 major currencies tracked by Bloomberg as hopes for infrastructure spending and tax reform under President Donald Trump’s administration dissipate and as low inflation hampers Federal Reserve plans for a third rate hike this year.

“The U.S. macro dynamic is starting to improve, but the dollar is clearly suffering from a political discount in our view,” said Ned Rumpeltin, head of currency strategy at Toronto Dominion Bank in London. “That will keep markets reluctant from fully embracing USD strength going forward.”

The big story of 2017 is the euro, he said, which is likely to extend its uptrend when the ECB provides more clarity on tapering.

The common currency has risen about 7 percent against the pound this year, its biggest gain versus a G-10 peer after the dollar. With the political and economic outlook in the euro zone brighter than that in the U.K., David Bloom at HSBC Holdings Plc forecasts the common currency to climb a further 10 percent to reach parity versus the pound by the end of the year.

The consensus among economists polled by Bloomberg is for the pair to end 2017 closer to current levels, at about 90 pence per euro. “The euro across the board has risen a bit too fast and some kind of correction is on the cards, also versus the pound,” said Georgette Boele, a currency strategist at ABN Amro Bank NV.

Options pricing suggests that, while investors remain bullish on the euro, they’ve trimmed some of their bets. The premium on three-month contracts to buy the euro versus sterling over those to sell was at 0.49 percentage point, according to risk-reversals data compiled by Bloomberg. That’s compared to the 0.81 percentage point intra-day high on June 16.

Golman Sachs is betting the Swedish krona and Norwegian krone will gain against both the euro and the pound during the remainder of the year as the countries’ central banks tighten policy sooner than markets anticipate. 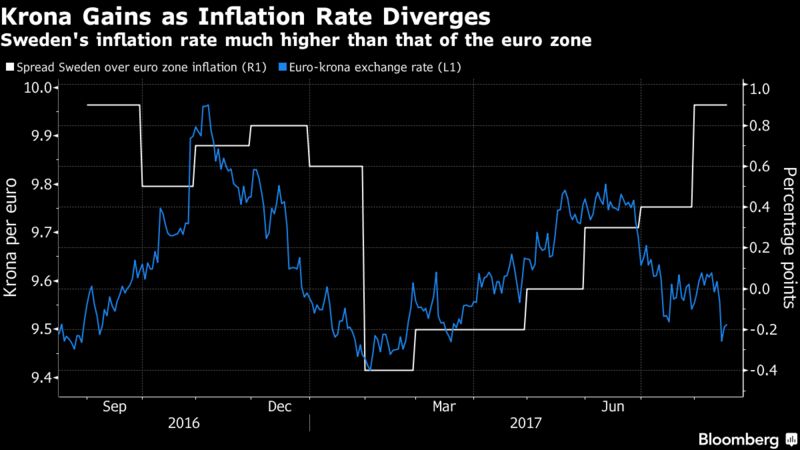 Sweden’s 4 percent growth and rising headline inflation -- topping the central bank’s 2 percent target in July for the first time in almost six years -- means the economy is on a hot patch. Norway’s growth is also picking up and while the country is struggling to keep inflation around target, the Norges Bank could consider reversing its most recent rate cut in March 2016 at some point next year, Goldman Sachs said.

The lira lost around 10 percent of its value against the euro this year. It fell to a record 4.2129 against the common currency in August, even as Turkey’s central bank held borrowing costs at a more than six-year high to combat above-target inflation. 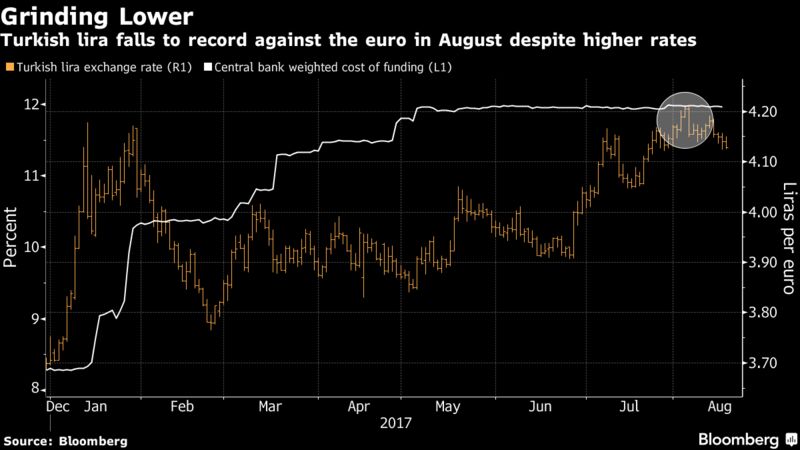 While a more hawkish central bank, wider interest rate differentials and reduced political uncertainty have helped Turkey’s currency regain lost ground against major crosses like the dollar, it wasn’t enough to buck the trend against the strong euro.

Rabobank strategist Piotr Matys expects the currency to continue to trade just above 4 per euro in the coming months, saying that scope for any gains depends mostly on how the single currency and lira fare against the dollar.

The peso has gained about 4.9 percent so far this year against the euro, making it the best performer of 24 emerging market currencies tracked by Bloomberg. The peso has rallied as fears over a global trade war and the termination of Nafta receded. 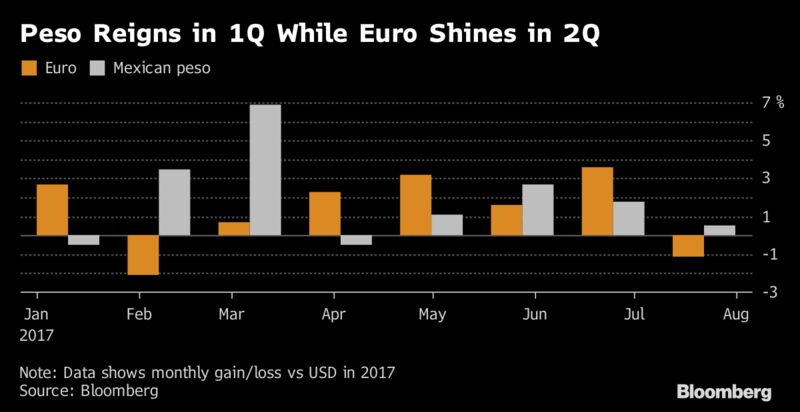 But the peso’s strength versus the euro is also a result of higher interest rates that attracted inflows. The interest rate differential between 10-year Mbonos and 10-year Bunds widened to more than 700 basis points in early 2017, the highest level in six years. While it has since narrowed, it remains higher than levels seen for most of the time between 2011 and 2016. 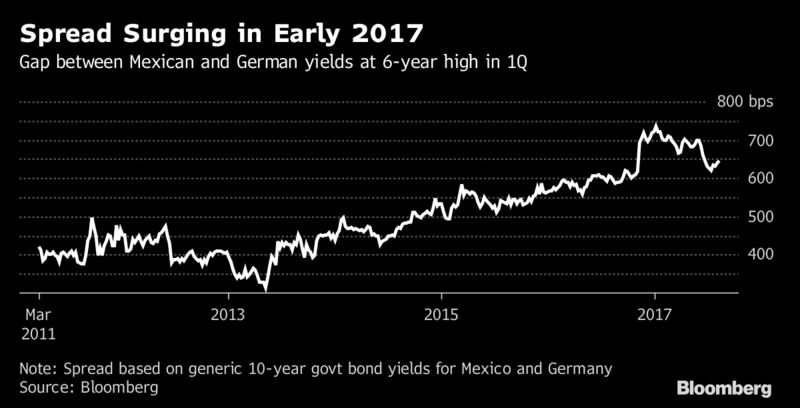 While most economists and the forwards markets expect the euro to maintain its uptrend versus the dollar in this and next year, the peso is expected to weaken past 18 per dollar by the end of the year and stay that way in 2018, from 17.725 per dollar now. That suggests the peso may trim its gains versus the euro in the rest of 2017 and into next year.

The currency lost more than 6 percent against the euro this year as it was buffeted by political turmoil. It reached its weakest level in 10 months against the common currency on Aug. 14, days after President Jacob Zuma survived a no-confidence motion. South Africa’s credit rating may be cut to junk if its policies become “even less predictable,” Moody’s Investors Service said on Wednesday.

Against that backdrop, the rand is forecast to reach 13.70 per dollar by the end of 2017, which equates to 15.892 to the euro, compared to 15.48 now, according to calculations based on Bloomberg’s foreign-exchange survey.