EghtesadOnline: While enthusiasm in the U.S. oil market dwindles, things are looking a little brighter across the pond.

For a second week, hedge funds refrained from making big bets on West Texas Intermediate prices stuck below $50 a barrel in New York as American output keeps rising. Meanwhile in London, Brent surged to a 12-week high as global physical marketstighten. The gap between the two benchmarks hasn’t been so wide in almost two years, according to Bloomberg.

“You still have fairly strong and resilient production in the shale sector, so there is a lot of light oil around in the U.S.,” said Harry Tchilinguirian, head of commodity markets strategy at BNP Paribas SA in London. 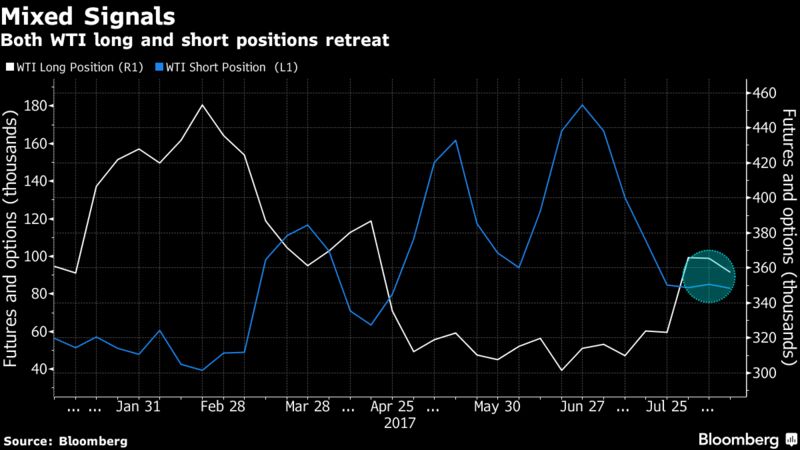 Crude output at major shale fields like the Permian in Texas and the Bakken in North Dakota is set to reach a record next month. Despite seven straight weeks of U.S. stockpile declines, the latest weekly report from the government showed supplies at Cushing, Oklahoma, the delivery point for WTI, expanded by the most since March.

That has kept the U.S. oil benchmark trading at a discount to its longer-dated futures. This market structure, known as contango, is typical of a glut because some buyers are willing to pay more for future deliveries to avoid storage and insurance costs for barrels they don’t immediately need. Those who are able to hoard the crude at low costs, on the other hand, seek to buy it at a cheaper price now to sell it for a profit later.

With Brent, the opposite is happening. Demand for delivery sooner is increasing, so the benchmark that’s most used around the world is selling at a premium to its longer-term contracts -- a situation know as backwardation that signals a shortage. The last time Brent’s second-month contract was this much more expensive than its third month was about three years ago, when prices were above $100.

The North Sea oil market is being supported by traders booking shipments to rare destinations such as Chile, Uruguay and Thailand. The volume of oil being stored there in floating tankers is falling.

Brent crude on Monday was trading little changed at $52.66 a barrel as of 12:45 p.m. in Singapore, holding last week’s 1.2 percent gain. WTI last week fell 0.6 percent. Brent for October delivery ended Friday at a $4.06 premium to WTI for the same month, the widest gap since September 2015. The spread narrowed to $4.02 on Monday.

Hedge funds decreased their WTI net-long position -- the difference between bets on a price increase and wagers on a drop -- by 2 percent to 274,441 futures and options in the week ended Aug. 15, data from the U.S. Commodity Futures Trading Commission show. Longs slipped 2.2 percent and shorts fell 2.6 percent.

Whatever position investors have “the uncertainty has increased, so they are losing some of their conviction,” Brian Kessens, a managing director and portfolio manager at Tortoise Capital Advisors LLC, who helps manage $16 billion in energy-related assets, said by telephone.

As for Brent, the net-long position on the global benchmark doubled over the six weeks through Aug. 8, according to data from ICE Futures Europe. A report on the latest change will be released on Monday.

With the summer driving season drawing to a close soon in the U.S., there are still lingering doubts in the minds of investors over whether supplies only dropped due to seasonal factors.

“The inability of the market to really push through $50 suggests that the buyers don’t have confidence to continue to try to build positions above that level because of the uncertainty about our fundamental picture right now,” said Gene McGillian, market research manager at Tradition Energy in Stamford, Connecticut.