EghtesadOnline: Asian stocks were mixed as investors monitored war drills scheduled for the Korean peninsula and prepared for a key meeting of global central bankers.

Benchmarks in Tokyo, Seoul and Sydney fell amid thin trading volumes, while they rose in Hong Kong and Shanghai. U.S. stocks rallied on Friday from session lows -- though they still ended the day down -- after the White House announced that Steve Bannon would be leaving his job as chief strategist, capping a tumultuous week for the Trump administration. Investors remain on edge after a terror attack in Barcelona and amid simmering tensions on the Korean peninsula. Oil held onto gains and the yen fell, Bloomberg reported.

The removal of Bannon, the former chairman of Breitbart News and a controversial key Trump adviser, may quell some of the fallout from Trump’s remarks on violence in Charlottesville, Virginia, which continue to raise questions about his ability to focus on plans to boost the economy.

Investors pulled $1.3 billion from equity funds in the week ending Aug. 16 as tensions over the Korean peninsula escalated, according to EPFR Global data. Outflows from U.S. stock funds were triple that, suggesting doubts about Trump’s stimulus plans are an additional worry. Heightened terror fears added to the malaise after at least 13 people died when a van plowed into pedestrians in Barcelona Thursday. 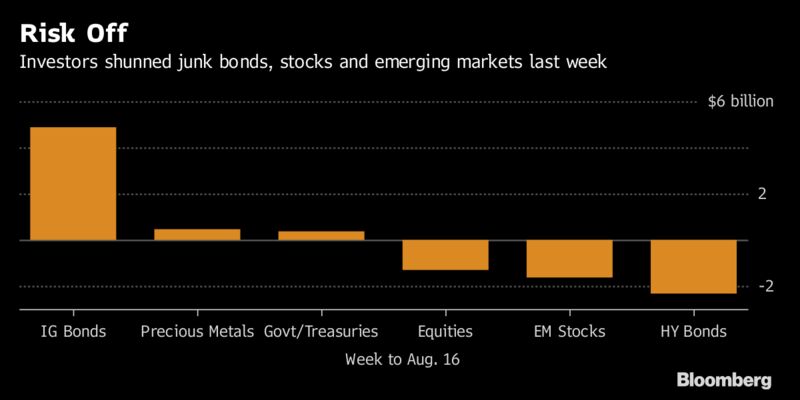 With economic data thin this week, markets are focusing on any significant policy statements coming out of Jackson Hole, Wyoming. Federal Reserve Chair Janet Yellen and European Central Bank President Mario Draghi are among central bankers attending the annual gathering later this week. The theme this year is “Foster a Dynamic Global Economy,” at a time when persistently weak inflation in the U.S. and elsewhere has clouded prospects for sustainable, stronger growth worldwide.

Among the key events this week: