EghtesadOnline: The market for physical barrels of crude from places as far apart as Oman and Colombia is strengthening beyond the traditional seasonal peak in demand, a positive indicator for global benchmark futures prices that remain stuck near $50.

Physical differentials -- the price gap between individual grades of crude and widely traded markers like Brent or West Texas Intermediate -- have strengthened over the last two weeks, according to data compiled by Bloomberg. That’s happening even for barrels due to be shipped in late September and October, typically a period of weaker demand due to seasonal refinery maintenance, Bloomberrg reported. 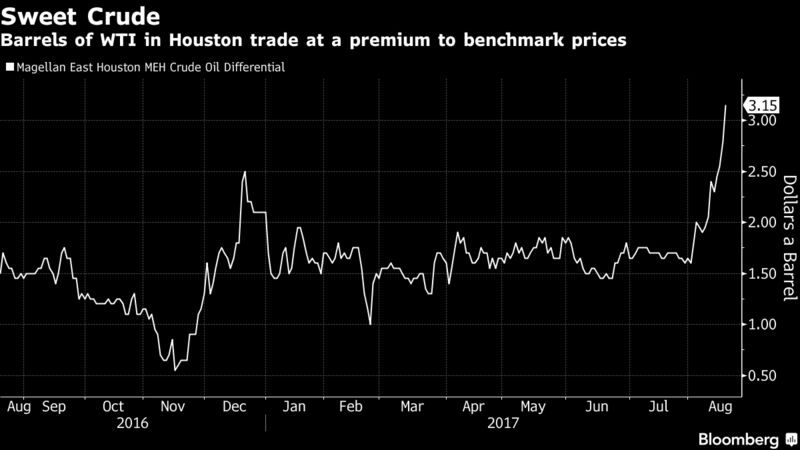 The relative prices of crudes such as Nigeria’s Forcados or Norway’s Ekofisk are rarely a topic of discussion outside the oil industry, but they are an important indicator. While hedge funds or other speculators tend to use futures or options contracts to make bets on the direction of prices in the coming months or years, physical differentials say more about the state of the global market right now. Narrowing discounts, or growing premiums, for particular grades of crude are a positive sign.

The U.S. physical, or cash, market has been particularly strong due to high local consumption in the refining corridor of the Gulf of Mexico and purchases of crude destined for export. The price of barrels of WTI delivered to the Magellan East Houston terminal surged on Thursday to a one-year high of $3.15 a barrel above the benchmark price of the grade, which is set at Cushing, Oklahoma. The premium was just $1.60 at the beginning of the month.

WTI is also trading at an unusual premium in Midland, Texas, where the grade originates and therefore is usually cheaper. Light Louisiana Sweet crude is changing hands at $3.15 a barrel above WTI, the strongest premium since February 2016 and up from $2.30 at the beginning of the month.

Lower-quality U.S. supplies have also strengthened. Alaska North Slope crude, which is relatively scarce over the summer as producers take advantage of good weather to perform maintenance, is trading at $3.44 a barrel over WTI, a two-year high. West Texas Sour has risen to a premium over the benchmark for the first time in a year. And on Friday Southern Green Canyon crude rose to just 30 cents below the benchmark, matching the narrowest discount in more than two years. 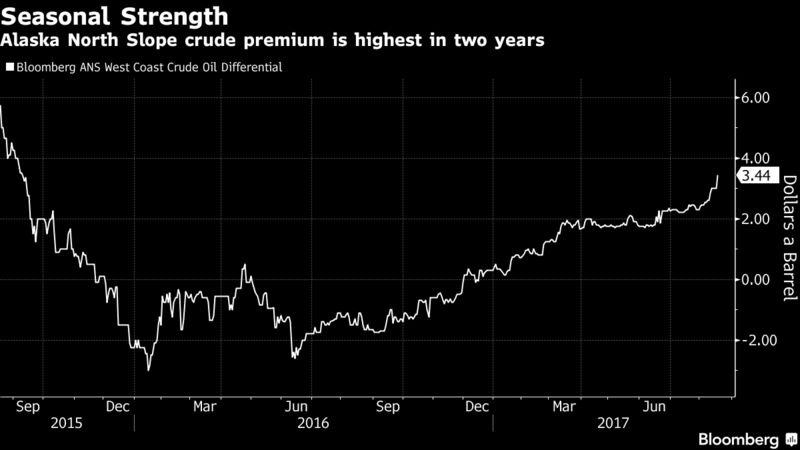 Middle Eastern crude is also strong as OPEC continues to cut output and Asian refiners enjoy good profit margins. Oman crude is quoted at 10 cents a barrel premium to the Dubai swaps benchmark, compared with a discount as wide as 60 cents last month.

The North Sea oil market is being supported by traders booking shipments to rare destinations, including cargoes of Ekofisk crude to Chile, Brent to Uruguay and Forties to Thailand. The volume of oil being stored there in floating tankers -- often a sign of oversupply -- is falling.

Forcados, the largest Nigerian crude stream, was quoted at 84 cents over Brent, the highest premium since at least December 2015. Qua Iboe Light, another key grade from the West African producer, is quoted at a 69-cent premium, the strongest in nearly a year. In Latin America, Colombia’s Vasconia crude is at a discount to WTI of $2.25 a barrel, the narrowest gap in four years.

Markets may be strong right now, but there are reasons to doubt it will persist.

Refineries in the U.S., the world’s largest consumer, processed a near record of 17.6 million barrels a day last week. If the usual seasonal patterns hold, their demand will drop to about 16.5 million by early September.

"As the U.S. driving season is drawing to an end refiners are shortly going into planned maintenance, potentially reducing demand for crude," said Tamas Varga, an analyst at brokerage PVM Oil Associates Ltd.

Oil traders are also worried that supply and demand fundamentals for early 2018 are looking weak. That could explain why the Brent and WTI benchmarks are on course for their third weekly decline, even as traders snap up crude cargoes.

Oil fundamentals are "strong now, but bearish seasonality for crude and products is just around the corner," said Mike Wittner, head of oil market research at Societe Generale SA.