EghtesadOnline: Traditional haven assets including gold and the yen slumped and core bonds across Europe declined with Treasuries as the prospect of war between the U.S. and North Korea receded. The dollar extended its advance as European stocks struggled for traction following Monday’s strong gains.

The greenback climbed a second day after comments from Federal Reserve Bank of New York chief William Dudley signaled another interest-rate increase this year is in the cards. The Stoxx Europe 600 Index edged higher after the German economy extended its growth spurt in the second quarter though at a slower pace than expected. The British pound tumbled to a five-week low after U.K. inflation unexpectedly held steady in July, clouding the outlook for rate increases, while oil halted a slide below $48 a barrel, according to Bloomberg. 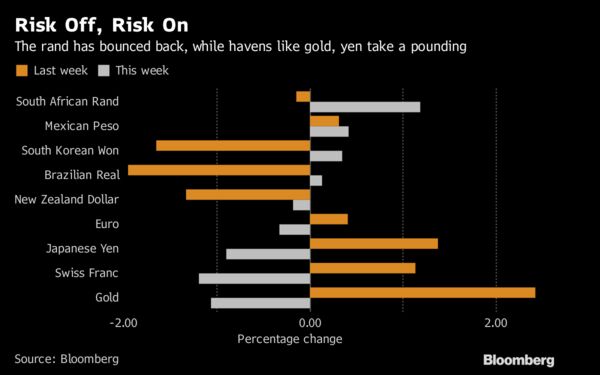 Japan’s currency, a haven in times of global tension, slumped after the Wall Street Journal characterized a North Korean media report as indicating that dictator Kim Jong Un had decided not to launch a threatened missile attack on Guam. The report, from KCNA on Tuesday, said Kim praised the military for drawing up a “careful plan” to fire missiles toward Guam. Kim was cited by KCNA saying he would watch the U.S.’s conduct “a little more.”

Meanwhile, data showed Germany’s economy expanded 0.6 percent in the second quarter, driven by domestic demand. That missed estimates slightly, but was accompanied by a revision in the first-quarter number. The euro retreated.

Here are some key events to watch this week: