EghtesadOnline: Oil investors are already worrying over the potential fallout when OPEC’s deal to cut output expires, marring emerging signs that the accord to shrink a glut is finally succeeding.

Uncertainty about how supplies curbed by the Organization of Petroleum Exporting Countries and its allies will be returned to the market in 2018 is clouding the outlook for crude, according to BMI Research. Prices remain vulnerable even though demand is strong, production gains are largely exhausted in Libya and Nigeria, and U.S. shale output is slowing, the unit of Fitch Group said in a report. 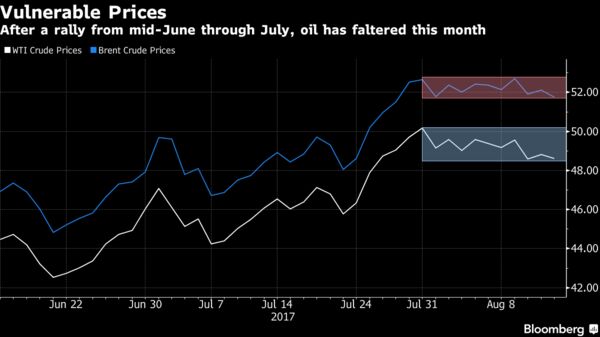 According to Bloomberg, crude fell the past two weeks as bullish signals went unheeded: Saudi Arabia cut sales to the world’s top oil market, prompt supply turned costlierthan later shipments, OPEC boosted demand estimates for its crude, and U.S. inventories slid. Apart from the concern over what happens when the output accord expires in March, there are other worries. The International Energy Agency cut estimates for the amount of oil needed from OPEC and warned of doubts over the commitment of nations involved in the production deal.

“OPEC is walking a tight rope,” said Ehsan Ul-Haq, London-based director of crude oil and products at Resource Economist. “If prices are above $60 a barrel then shale oil will come back. If OPEC producers decide to reduce more, prices will go above $60 a barrel. If they don’t comply fully, then prices will go below $50. It’s very difficult for them.”

West Texas Intermediate, the U.S. marker, is trading near $47.50 a barrel and Brent crude, the benchmark for more than half the world’s oil, is near $51. Both are down more than 10 percent this year even as OPEC has curbed output since the start of 2017 to help lift prices from the worst crash in a generation. Futures were at more than $100 a barrel in mid-2014.

BMI doesn’t expect market sentiment to return to “bullish extremes,” and said that Brent is vulnerable to short-term pullbacks over the coming months. That echoes industry researcher JBC Energy GmbH’s warning that prices are at risk of falling back without deeper output curbs by OPEC and after demand in the U.S. weakens following the end of the summer driving season that’s been spurring the declines in American inventories.

Last week, the front-month Brent contract was more expensive than the second-month contract, a situation last seen in April 2016, and the trend is spreading to subsequent months along what’s known as the oil futures curve. That condition, known as backwardation, signals demand is outpacing supply and is seen as a critical indicator to show whether OPEC’s plan is working.

Demand has expanded this year and may continue to be strong in 2017, according to BMI. Goldman Sachs Group Inc., Morgan Stanley, JPMorgan Chase & Co. and Citigroup Inc. have also said previously that the slump in prices is being tempered by surprising strength in consumption.

Still, demand growth may once again be overcome by supply next year with “the anticipated return of OPEC barrels to the market in 2018,” BMI said in its report.

OPEC’s rate of compliance with its promised cutbacks slipped last monthto 75 percent, the lowest since the accord started in January, according to the IEA. Iraq’s implementation was just 34 percent, Venezuela’s 28 percent and the U.A.E.’s 53 percent. Adherence among the non-members coordinating with OPEC was at 67 percent.