Asian Stocks Sink Most This Year on U.S.-North Korea Rhetoric

EghtesadOnline: Asian equities excluding Japan slid the most in eight months on Friday as the rhetoric between U.S. and North Korean leaders intensified.

The MSCI Asia Pacific Index excluding Japan lost 1.6 percent to 155.61 as of 4:57 p.m. in Hong Kong, set for its longest losing streak since July 4, as five stocks declined for each one that advanced. Financial and technology shares dropped the most. Stocks in developed Asia, China, South Korea and Indonesia fell more than 1 percent, while Japanese markets are closed for a holiday, Bloomberg reported.

Investors are paring positions on speculation that equities, recently at multi-year highs amid record-low volatility, may tumble further as tensions escalate. Trump stepped up his campaign of pressure on North Korea, promising a response to any strike against America or its allies. U.S. equities slid the most since May.

"This situation is beginning to develop into this generation’s Cuban Missile crisis moment," Rob Carnell, chief economist for Asia at ING in Singapore, wrote in a note. The only diplomatic outcome that may now satisfy the U.S. is if North Korea abandons its nuclear ambitions, he wrote.

Some still believe that market impact from North Korea’s provocation is likely to be muted as MSCI Asia ex-Japan Index tests a trend line supporting the benchmark since its low in December. 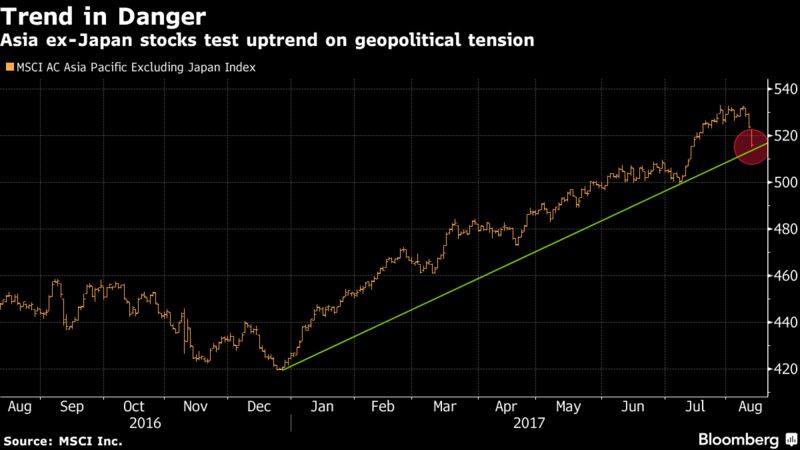 "Historically, the market impact from North Korea’s nuclear provocations has been limited," James Cheo, Investment strategist at Bank of Singapore wrote in a note on Friday. Geopolitics only matter when it induces either growth or an oil shock."