The Wait for a U.S. Inflation Pickup Drags On, Clouding the Fed Outlook

EghtesadOnline: It’s becoming an endless wait for U.S. inflation to pick up. And the fifth straight miss on core-price forecasts adds to the burden on Federal Reserve policy makers to explain why they’re moving toward a December interest-rate increase.

Consumer prices continued to be subdued in July, a Labor Department report showed Friday, pushing against the idea that unemployment at a 16-year low will help inflation accelerate. Declines in hotel rates, vehicle prices and child care accompanied a continuing drop in wireless-phone service costs that some Fed officials have labeled as transitory, Bloomberg reported.

Economists also cite retailers’ lack of pricing power and still-tepid wage gains as factors keeping price pressures subdued, with the July results another sign inflation may take longer to reach the central bank’s goal even as it prepares to wind down asset holdings. The report adds fodder to the debate among policy makers over whether price gains are indeed making clear progress toward their 2 percent goal.

“This is a string of five weak prints in a row -- it is not just noise, it’s the trend, and it reflects rotating factors that are pretty broad-based,” said Laura Rosner, senior economist and partner at MacroPolicy Perspectives LLC and a former New York Fed analyst. “It probably lowers the odds of them hiking later this year after they start to normalize the balance sheet.” 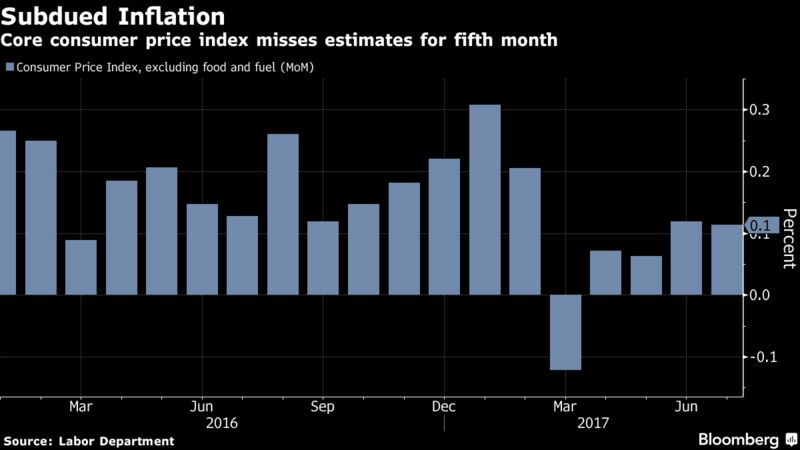 While the central bank’s gradual approach to raising borrowing costs has helped reduce unemployment, it has failed to lift inflation to its target, matching or exceeding it in only two months of the last five years. The gauge hit 2 percent early in 2017 only to slide back.

The weak inflation report helped push the dollar and Treasury yields lower. Economists surveyed by Bloomberg earlier this month saw the Fed lifting rates by a quarter percentage point at their Dec. 12-13 meeting. Analysts also cut inflation forecasts for this year and next.

Odds in financial markets for a December rate increase stood at 30 percent after the data, unchanged from before the report.

“I actually want to now see more evidence that we’re making progress in reaching our inflation objective,” Dallas Fed President Robert Kaplan said Friday after the report. He said he feels comfortable that the current level of interest rates “is the perfect place for us to be.”

William Dudley, head of the New York Fed, said Thursday that “it’s going to take some time” for inflation to rise to the central bank’s target.

The Fed’s goal is based on a separate Commerce Department price measure that is related to consumption and contains many components of the consumer price index. That gauge will be released on Aug. 31.

“The Fed will want to see a number of months of at least stable inflation, and preferably some uptick in inflation, before they’ll be happy,” said Ward McCarthy, chief financial economist at Jefferies LLC in New York. “For the time being, rate hikes are on the back burner for the Fed.”

Signs of stabilization, following several months of very weak inflation readings, may give some ammunition to those who project price pressures will build.

Inflation is “weaker than the Fed would like, weaker than anyone would like, but not so weak that it calls the whole outlook into question,” said Roberto Perli, partner at Cornerstone Macro LLC in Washington, and a former Fed official. “We’re still within striking distance of 2 percent -- it’s not the end of the world,” he said, referring to the Fed’s inflation goal.

Still, “they have a lot of reasons to be cautious,” Perli said. “They probably still think the weakness in inflation is temporary, but they cannot be sure.”

One of the big downward surprises was the record decline in hotel rates. “If this single category had been flat, the core CPI would have rounded up to 0.2 percent and the narrative around this release would be entirely different,” Stephen Stanley, chief economist at Amherst Pierpont Securities LLC, said in a note. 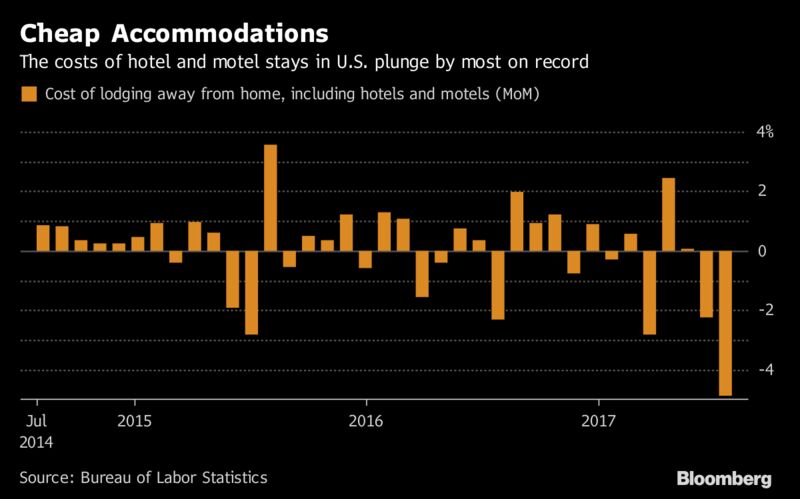 The Fed will have several more reports on inflation to digest before its December meeting.

“They need to figure out what’s going on with inflation before they continue to move,” Rosner said. “It’s going to require more analysis, more discussion, and we’ve seen that uncertainty slow them down in the past, and I think we’ll see it slow them down again.”