EghtesadOnline: Should U.S. President Donald Trump unleash “fire and fury” on North Korea, it will bring conflict to the core of the global commodity trade.

North Korea is an ant in the world of raw materials, as years of sanctions have more or less isolated it from international markets. But it’s an ant surrounded by elephants. China takes more than half the world’s soybean shipments. Japan is the world’s largest importer of liquefied natural gas. South Korea is among the biggest buyers of coal and sellers of steel. The three countries combined import about one-third of the world’s seaborne crude oil, Bloomberg reported. 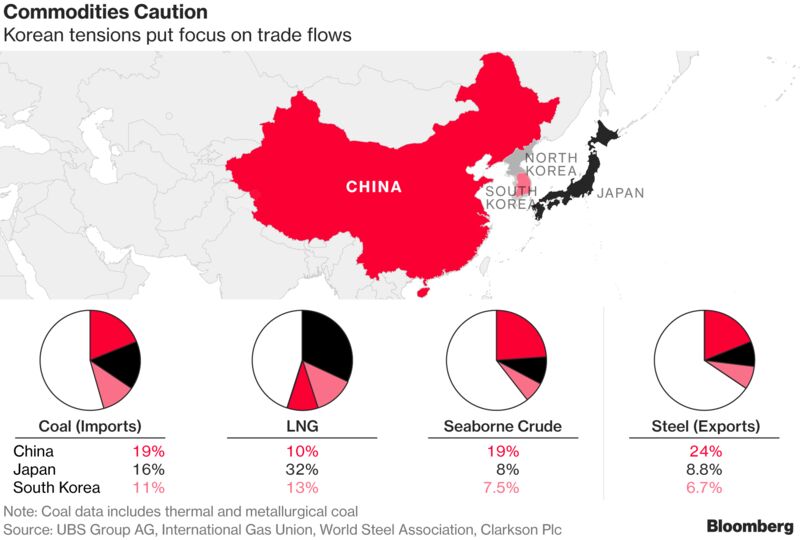 Commodity shippers are intently watching North Korea’s missile tests and Trump’s rhetoric to see if the tensions escalate into activity that could disrupt commodity flows into those countries. While it remains a war of words for now, an intensification could lead to higher insurance rates for vessels, exclusion zones or port disruptions, which may increase transport costs and force route changes, according to shipping analysts, academics and industry consultants.

“Rhetoric from and towards North Korea has ramped up materially in recent days, and although regional trade flow disruptions are likely a low probability event for now, it is important to note how crucial the Korean Peninsula and North Asia are to commodity markets and trade,” Christopher Main, a London-based analyst for Citigroup Inc., wrote in a report Thursday.

Trump stepped up his campaign of pressure on North Korea, warning the regime not to follow through on its threat to test missiles near Guam and promising a massive response to any strike against the U.S. or its allies. Trump stood by his threat Aug. 8 to bring down “fire and fury,” saying that the statement maybe “wasn’t tough enough.” He declined to rule out a preemptive strike on Pyongyang, North Korea’s capital.

The impact on commodity trade routes would depend on whether the reach of the conflict is restricted to the Korean peninsula or spreads more broadly around the region. In the 10-week Falklands Islands war of 1982, the U.K. enforced a 200-nautical-mile maritime exclusion zone around the islands that made any ship entering the area a potential target. In the same decade, neutral commercial vessels were attacked in the Persian Gulf during the war between Iran and Iraq.

South Korea’s capital Seoul is about 25 miles (40 kilometers) from the North Korean border, one of the world’s most-guarded. But the impacted trade area could be wider in the event of conflict. Dalian in China is about 170 miles from the North’s shoreline. Japan’s main island is about 320 miles from North Korea at its closest. 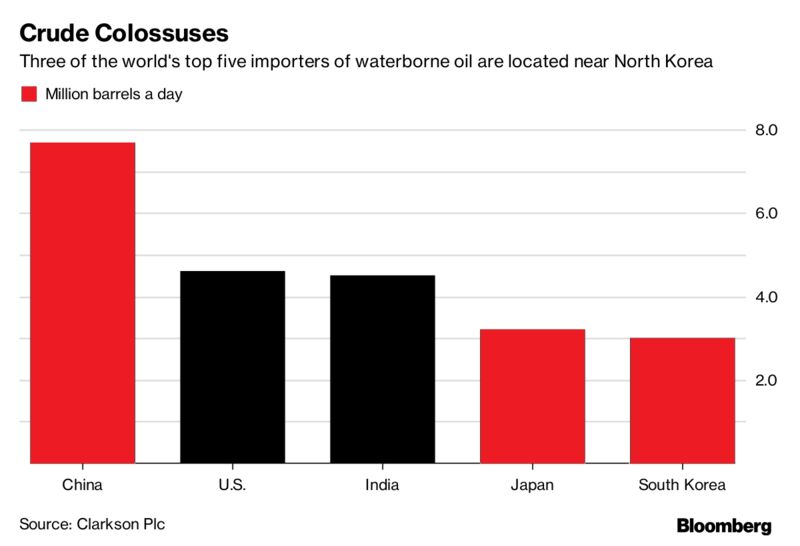 Shipping rates in the region could increase by 20 percent to 30 percent if war breaks out and vessels are forced to change routes, increasing transport times, said Gary Chen, founder of Xinde Marine Services, a marine risk management company based in Dalian. While shipments can be redirected to other ports or conveyed over land by other means, that would represent an additional cost.

“It is to be expected that if the tension escalates that commercial shipping will respond by avoiding certain areas or ports possibly also regions,” David Attard, a professor at the IMO International Maritime Law Institute in Malta, said in an email. “Indeed this will affect also navigational routes, with the possibility of rising costs.”

Three of the world’s five biggest importers of crude oil share borders or seas with North Korea. Virtually all of Japan and South Korea’s crude imports, as well as the vast majority for China, come via seaborne shipments. Combined, the three countries receive about one-third of the 39.9 million barrels of oil that flows around the world daily in giant tankers, according to Clarkson Plc. 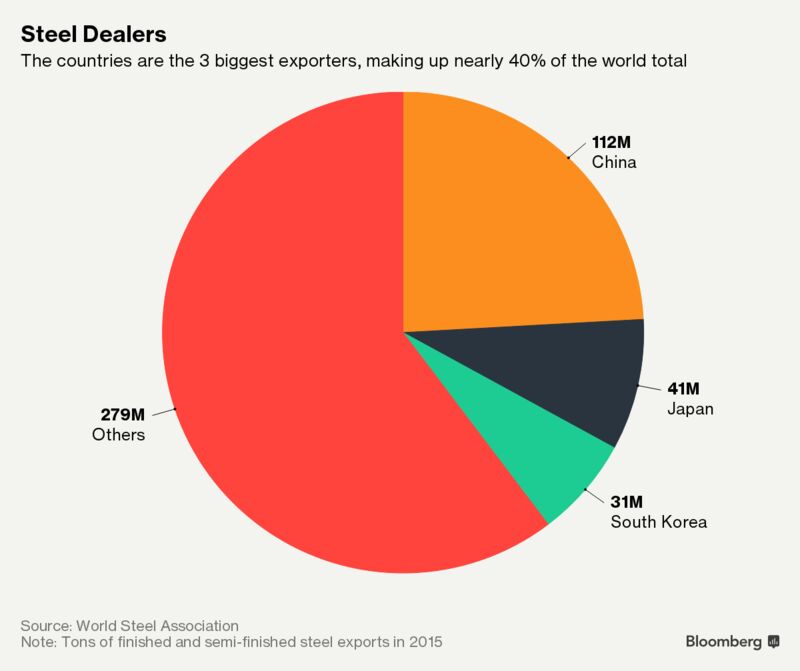 Outright commodity prices and commodity volatility markets are scarcely pricing in any geopolitical risk, according to the Aug. 10 Citigroup note. The Bloomberg Commodity Index is down 4.7 percent so far this year. 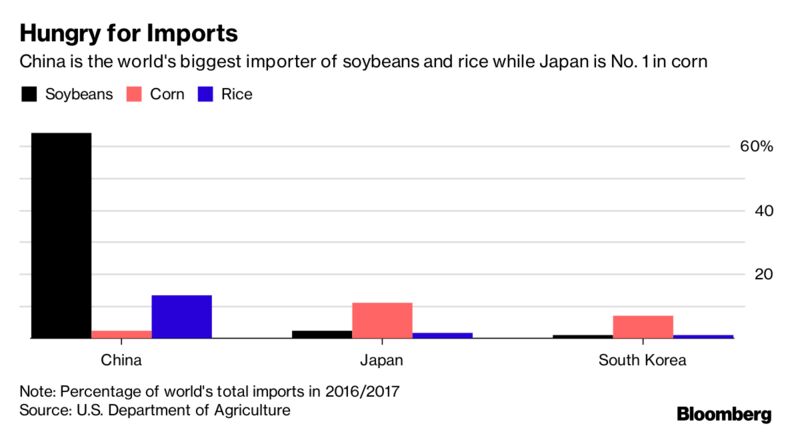 China accounted for 64 percent of the world’s imports of soybeans in 2016-2017, according to the U.S. Department of Agriculture, and is the world’s biggest importer of rice, accounting for about 13 percent of trade. Japan is the largest buyer of overseas corn, and the three countries combined account for 20 percent of all imports of the grain. 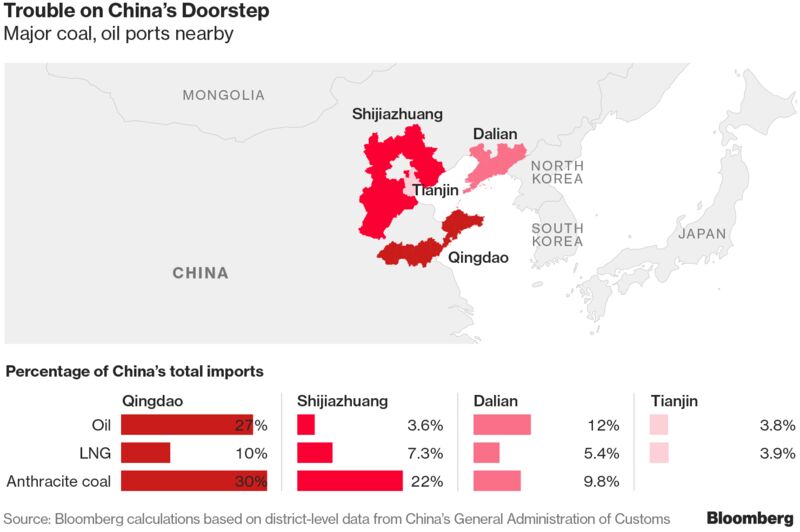 Four of China’s northern customs districts near North Korea receive about 47 percent of the country’s oil imports and 63 percent of its anthracite coal, according to the General Administration of Customs. The country isn’t as dependent on waterborne imports as Japan and South Korea, as it has pipelines and land links to bring in some oil, natural gas and coal, and it can always re-route tankers to southern ports or move commodities by land.

“Energy imports to China may encounter some short-term inconveniences such as diversion to other ports, but overall it won’t be affected much as China’s energy supply is now quite diversified and the Korean peninsula is not a source of supply,” said Lin Boqiang, director of Xiamen University’s China Center for Energy Economics Research.