EghtesadOnline: U.S. stocks rose and volatility eased as markets showed signs of stabilizing after days of verbal sparring between the U.S. and North Korea. The dollar fell after American inflation remained subdued.

The S&P 500 Index rebounded from its worst day since May as a measure of calm returned to global equity markets roiled by tensions on the Korean peninsula. The latest reading on core prices showed a below-forecast rise, making it tougher for the central bank to stay on its tightening course. That pushed the greenback lower and boosted gold, according to Bloomberg.

The calm on Friday wasn’t enough to undo the damage done by the geopolitical confrontation that rattled markets all week. The S&P 500 had its worst period since March, European shares fell the most since Trump’s election and the credit had its deepest slump in a year. While the CBOE Volatility Index slipped Friday, it’s still higher by almost 50 percent in the week, the most since January 2016. Gold stood at a two-month high and the yen briefly pushed through 109 per dollar. 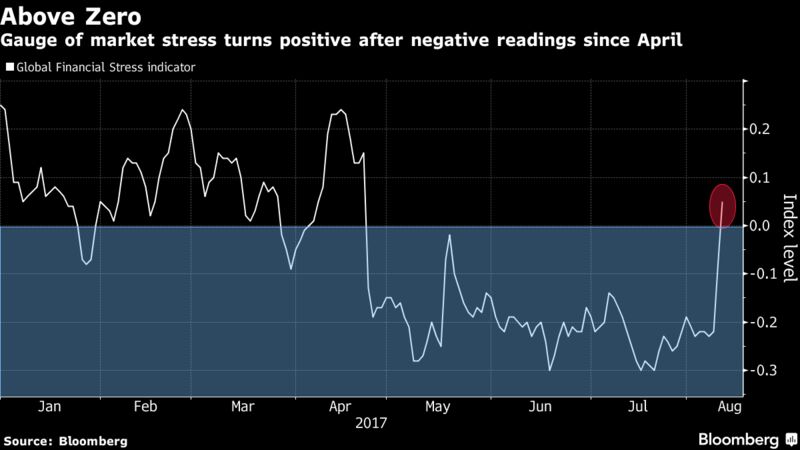 The week of angst continued a sobering pattern for financial markets in August, when volatility tends to rise even as many investors head for vacation. The latest saber rattling has some firms preparing contingencies for the weekend -- just in case, especially with little in the way of economic data or central bank action to focus on in the coming week.

Some big investors have been warning now would be a good time to reduce levels of risk in portfolios. Ray Dalio, who leads the world’s largest hedge fund at Bridgewater Associates, recommends investors consider placing 5 percent to 10 percent of their assets in gold as a hedge against current political and economic risks.

Dollar US inflation US stocks US North Korea tension