EghtesadOnline: President Donald Trump loves to trumpet the record run in U.S. stocks. “Stock market hits another high with spirit and enthusiasm so positive,” he tweeted on July 12, in one of eight posts about the market this month.

But, according to Bloomberg, he’s hardly tweeted a word about another, less rosy measure of Trump’s America: the U.S. dollar. The greenback has fallen hard on his watch and currency traders are now betting on even more declines.

Is Trump necessarily “bad” for the dollar, that global symbol of U.S. economic might? Probably no more than he is “good” for stocks. And you can argue much of the dollar’s slide -- now the longest in six years -- has to do with the vagaries of central-bank policy and interest rates. But more and more, it’s the political drama in Washington that is taking center stage. And there’s no better place for investors to express their views about how a nation is managing its affairs than the $5.1 trillion-a-day global market for foreign exchange. 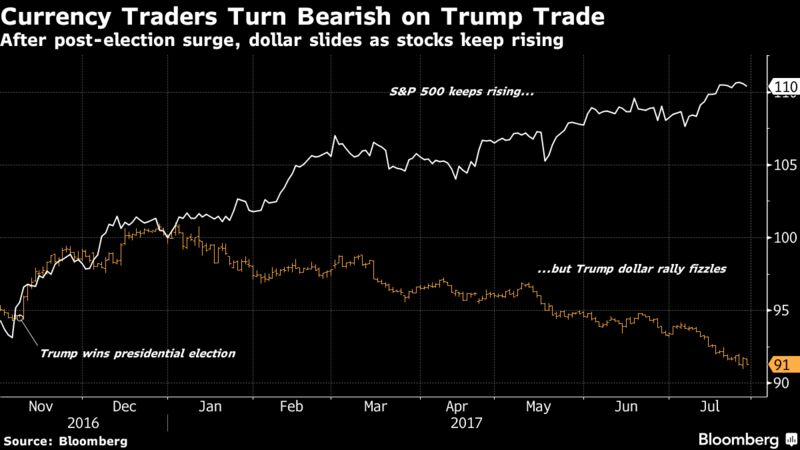 “The beauty of currency is that it’s a relative price,” said Shahab Jalinoos, Credit Suisse’s head of global FX strategy. “It tells you how a country is perceived relative to every other country.”

Currencies, the medium of exchange that affects all other prices, have traditionally been the purest play on a country’s outlook, whether economic or political. The relationship has only grown stronger in an era of quantitative easing, which has distorted the bond and stock markets. And with central banks around the world pushing interest rates to rock-bottom levels, rate differentials are far narrower than they used to be, which has helped make currency traders more attuned to political developments.

“What’s most interesting is the way that so many policy decisions and risk events get played out through currency markets these days,” said Mark Haefele, the global chief investment officer at UBS Wealth Management, which oversees more than $2 trillion.

To be fair, the dollar has also come under pressure from lackluster economic data, which weakened the case for higher interest rates in the U.S. as central banks elsewhere move to tighten. And Trump, on more than one occasion, has talked about wanting a weaker dollar and complained that its strength is a negative for U.S. manufacturing -- a key part of his “America First” agenda.

Yet even here, going against America’s longstanding “strong dollar” policy so publicly could backfire, according to John W. Snow, who served as Treasury secretary under President George W. Bush.

“You don’t want to add to the volatility,” said Snow, now the chairman of Cerberus Capital Management. “It’s a critically important market.”

“The currency reflects what is going on in a country and the expectations for that country’s growth and prosperity and inflation and interest rates,” he said.

At first, currency traders, like their counterparts in the stock market, embraced Trump’s election and bought into his pro-growth promises of lower taxes and higher infrastructure spending. The dollar soared in November before ending the year at the highest since at least 2005, according to the Bloomberg Dollar Spot Index, which tracks the greenback versus 10 global currencies.

Since then, things have unraveled. While the stock market has rallied to new highs as equity investors looked past politics and focused on corporate earnings, the dollar has slumped more than 8 percent, wiping out the post-election bump and then some. To many, it reflects deepening worries the turmoil embroiling Washington -- much of which has been Trump’s own making -- is undermining his ambitious economic agenda.

And as his administration has lurched from one crisis to the next -- from the firing of FBI Director James Comey to allegations of collusion with Russia and the Republican Party’s failure to repeal Obamacare -- something of a consensus has emerged in the currency market. And that’s to sell the dollar.

“Look at how the dollar moved up when it was felt that the Trump election was going to lead to happy days again,” Snow said. Now, “it looks like the administration’s ability to get things done, like infrastructure spending and tax reform and health-care reform, are not being realized.”

Take July 20, for instance, when news hit that an investigation of the Trump campaign’s ties to Russia expanded to his financial dealings. The dollar immediately sank to an 11-month low. Just two days earlier, the currency slumped after a Republican effort to overhaul health care broke down.

UBS’s Haefele is a dollar bear himself. His favorite trade is to bet on the euro rising against the greenback, and he sees the common currency potentially reaching $1.20 within the next 12 months from $1.1751 last week. That’s a stunning turnabout from the start of the year, when the seemingly unstoppable dollar pushed the euro to 14-year low of $1.0341.

He’s hardly alone. Hedge funds are piling into bearish bets on the dollar, and now have the biggest net short position in four years. The median year-end forecast for the greenback has fallen to $1.14 per euro, the lowest since 2015.

“We’re going to see continued weakness in the dollar,” said Kristina Hooper, the global market strategist at Invesco. “It is very much a vote of confidence, or lack of confidence, in the U.S. economy.”