EghtesadOnline: While many sanctions on Iranian goods and services remain in place, the Joint Comprehensive Plan of Action (the formal name of the nuclear deal Iran signed with world powers in 2015) permits Iranian food exports into the United States for the first time since 2010.

The US Department of Treasury’s Office of Foreign Assets Control has authorized a general license for Iranian food imports, which effectively permits American importers to transact sales without applying for a specific license. As part of this policy change, OFAC also authorized US banks to process letters of credit for payments and US persons to broker purchases.

However, because US persons remain barred from engaging with Iranian financial institutions, the JCPOA authorized third-country banks to step in and facilitate transactions, including currency conversions, so long as they are limited to products exempt from sanctions, reads a report recently published by the US Department of Agriculture titled “Developments in Iran’s Agriculture Sector and Prospects for US Trade”. According to Financial Tribune, excerpts follow:

Items explicitly excluded from this list include alcoholic beverages, cigarettes, gum, or fertilizer. However, the most significant change pertains to the newly authorized role for US and third-country depository institutions to engage in certain exempted transactions.

OFAC has licensed most US agricultural exports to Iran since 1999. While the past several years have seen sporadic US shipments, the recent removal of sanctions and the expected boost to Iran’s economy raise the probability of increased demand-driven exports to the country. US commodities already constitute much of the food-import basket in many countries of the Middle East, including Egypt, Saudi Arabia and Turkey.

Considering these countries’ many agro climatic, demographic and economic similarities with Iran, the potential exists for US exports to enter this market with greater consistency and volume.

However, like other countries in the Middle East, Iran has found competitive suppliers in Central Asia, Eastern Europe and South America. Due to the price and transport cost advantages of these countries, the ability of US producers to gain market share in Iran remains uncertain.

Although the US ban on food exports to Iran was lifted nearly 20 years ago, ongoing bureaucratic and banking hurdles, as well as general political risk, continue to hamper US exporters’ efforts to expand shipments. Nevertheless, Iran’s growing incomes and its increasing demand for animal products—due to long-run trends as well as the immediate impact of sanctions relief—portend greater import demand for food commodities, particularly animal feeds, consistent with the overall trend throughout the Middle East. With this growing market, opportunities for US crop exporters to stake a greater presence could arise. 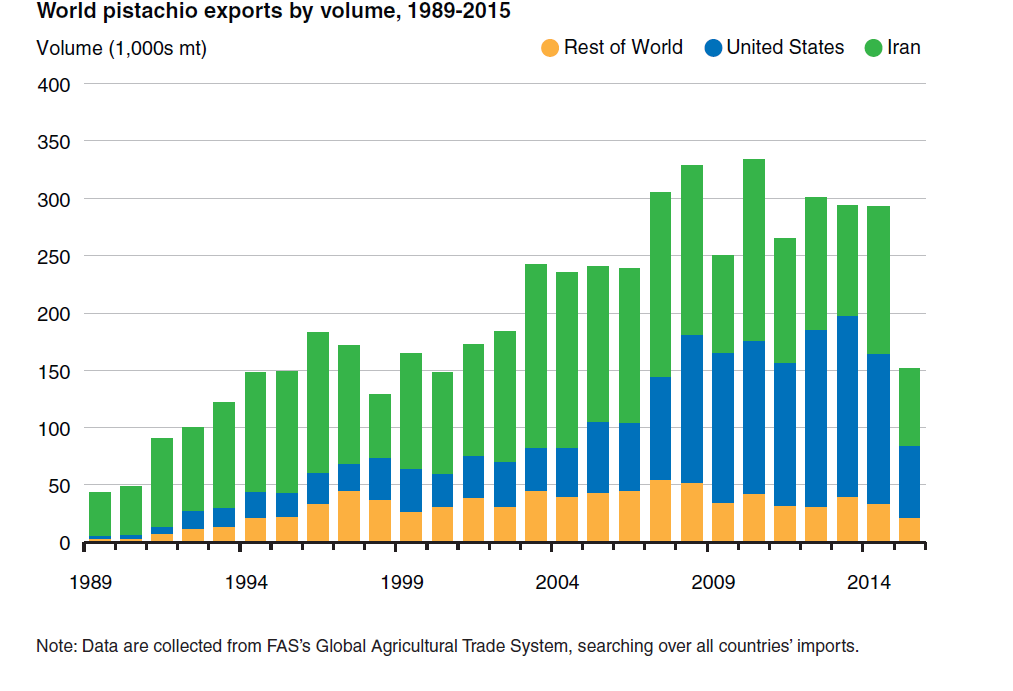 Iran’s major food exports, like those of many overseas suppliers to the United States, fall under the “specialty crop” designation (e.g., tree nuts, spices and caviar).

By far the most significant and valuable product in Iran’s food-export profile is pistachios. Prior to the Islamic Revolution in 1979, Iran was the world’s largest producer and exporter of pistachios, as well as the biggest supplier to the United States. But as relations with the United States frayed and economic sanctions took hold, Iran’s pistachio shipments to the US plummeted. California’s nut producers rushed to fill the supply gap, lifting US pistachio production from around 7,700 tons in 1979 to 233,000 tons in 2014, when production was valued at nearly $1.3 billion.

While California-grown pistachios displaced Iran’s historical share of the US market, Iranian growers continued to supply markets in Europe and elsewhere, expanding Iran’s share of the world market well into the 1990s. But in 1997, European regulators detected high levels of aflatoxin, a fungal infection with harmful carcinogenic effects, in Iranian pistachio shipments and imposed a temporary ban on Iranian imports. Again US producers stepped in to replace the Iranian supply, gradually eroding Iran’s share of the EU market.

A few years later, even-stricter aflatoxin regulations drove Iran’s exports further down, pushing the country’s pistachios into markets in the Middle East and Asia, where regulations are relatively lax. As a result of sanctions and phytosanitary requirements, in recent years, Iran has lagged behind the United States in total exports though in 2015, drought conditions in California pushed US exports below Iran’s.

While the removal of sanctions potentially opens US markets to Iranian pistachios, other trade disputes linger, namely longstanding anti-dumping and countervailing duties. In 1986, the US International Trade Commission determined that pistachio imports from Iran materially harmed the domestic pistachio industry as a result of sales at “less than fair value”.

A parallel investigation by the Department of Commerce found dumping and subsidy margins that led to anti-dumping and countervailing duties on Iranian origin in-shell pistachios of 241% and 99.5%, respectively, and countervailing duties on roasted pistachios of 318%. While these countrywide rates persist to this day, with a handful of company-specific exceptions, they have only mattered during periods in which Iranian pistachio imports were not embargoed, such as the first decade of the 2000s.

News reports have suggested that the nuclear deal’s removal of the embargo might permit Iranian pistachios to compete directly with California producers in the US market. But in June 2017, the ITC determined that revoking the duties would likely hamper the US pistachio industry, a decision that allows the duties to remain in place for the foreseeable future. Under such conditions, Iran’s pistachio shipments to the US will likely remain very low.