EghtesadOnline: Stocks in Asia dropped and the yen rose for a fifth day as traders showed caution ahead of a week packed with earnings results and a Federal Reserve interest-rate decision. Oil remained below $46 a barrel before an OPEC meeting on Monday.

Equities gauges were lower in Japan, Australia and South Korea, while benchmarks in Hong Kong and China advanced. The Australian dollar remained above 79 U.S. cents ahead of a speech by Reserve Bank of Australia Governor Philip Lowe on Wednesday.

According to Bloomberg, the market is bidding down the dollar as risk aversion increases ahead of senior presidential adviser Jared Kushner appearing before the Senate intelligence committee on Monday, and Donald Trump Jr. and former Trump campaign Chairman Paul Manafort going before Senate committees investigating Russian meddling on Wednesday.

Earnings from industry bellwethers from Amazon.com Inc. to GlaxoSmithKline Plc and Credit Suisse Group AG are due this week, and central bank policy discussions are providing the latest tests for the bull market in equities that’s propelled the value of global shares to $78 trillion. The Fed is expected to stand pat, with investors looking to the accompanying statement for clues on how officials plan to start reducing the balance sheet. 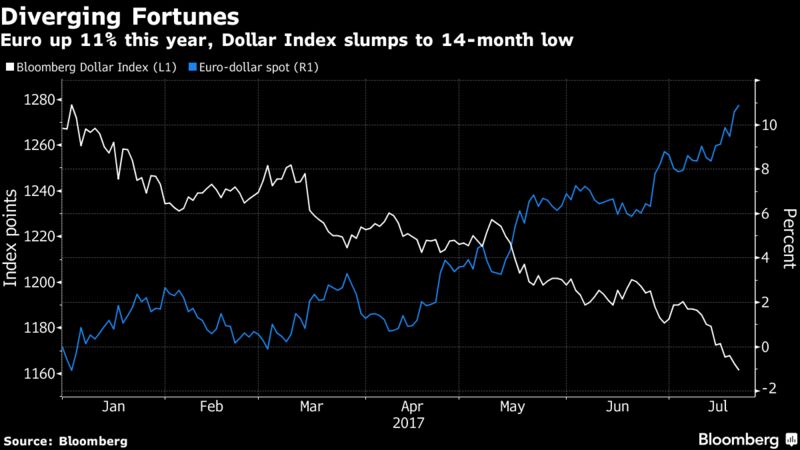 These are the notable moves in markets: