More than a year after the kingdom’s dominant leader, Crown Prince Mohammed bin Salman, unveiled a blueprint for the post-oil era, the drop in crude prices is making economists more skeptical about whether some of the plan’s medium-term targets can be met. The reason: lower oil revenue deprives the government of money needed to balance its books by 2020 while trying to stimulate growth to ease the transition’s burden on the population, Bloomberg reported.

IMF data released Friday underscored the challenge. The fund lowered its forecasts for Saudi economic growth this year to “close to zero.” Analysts at Citigroup, EFG-Hermes and Standard Chartered see a bleaker picture, expecting the economy to shrink for the first time since the global financial crisis in 2009, according to data compiled by Bloomberg.

Deeper economic pain will test the authorities’ resolve to pursue tough reform measures as they seek to go against the run of history, which suggests that successful diversification efforts depended largely on policies put in place before a price shock.

“Unless you start seeing some economic growth drivers kicking in, which would really have to come from the government and would require higher oil prices, the pace of fiscal reforms would likely remain slower than in 2016,” when authorities cut spending and lowered costly subsidies, Monica Malik, chief economist at Abu Dhabi Commercial Bank, said in an interview.

“We see the possibility of having a very low growth or stagnant economic environment with the deficit still remaining high,” she said. “This is a key risk.”

Brent crude prices have declined 15 percent this year to $48 a barrel, well below the level that the kingdom needs to balance its budget, as producers grapple with how to eliminate a global supply glut. Under an accord between OPEC and other major producers, Saudi Arabia has cut its output.

The International Monetary Fund revised its forecast for Saudi growth this year to 0.1 percent from 0.4 percent. And while it now expects non-oil GDP to grow 1.7 percent after stalling last year, the new figures compare with an earlier estimate of about 2 percent.

“We don’t really see much quality growth,” he said by email. “Credit growth is nil, project awards weak and the contraction in cement consumption is in double digits.” 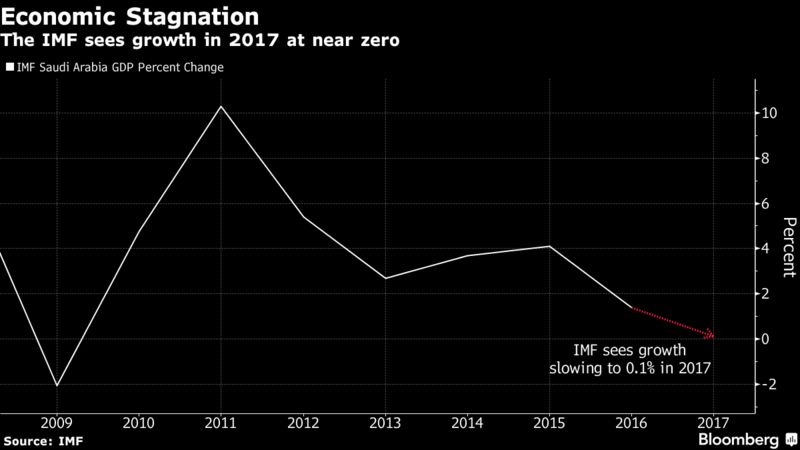 But even a rebound in prices to as much as $55 a barrel won’t be enough to balance one of the highest budget deficits in the Middle East by 2020. To do that, according to Dima Jardaneh, head of Middle East and North Africa research at Standard Chartered in Dubai, the kingdom “would likely require an incremental increase in oil prices to around $70.”

Low crude prices are hobbling the crown prince’s economic plans at a time when foreign policy challenges threaten to cost him political capital. His military has been mired in a costly war in Yemen for more than two years, and he’s led a group of four nations into a diplomatic standoff with Qatar that could drag on.

To be sure, the IMF commended the Saudi reform efforts and said it expects the budget gap to fall to 9.3 percent of GDP this year from 17 percent in 2016 -- and to just above 1 percent by 2022. “This assumes that the major non-oil revenue reforms and energy price increases outlined” by the government last year will go ahead as planned, it said.

The government has imposed taxes on tobacco and soda as well as a levy on expatriates’ families this year. Value-added taxes are set to be introduced from 2018. Officials have also touted plans to launch a four-year, 200-billion-riyal ($53 billion) program to support private sector activity this year.

Authorities, however, reversed a decision to cut public sector bonuses in April, citing better-than-anticipated budget data in the first quarter. The kingdom will also likely delay the second round of subsidy cuts to later in 2017 or early next year, according to people with knowledge of the matter.

“We believe that the government has already signaled that it is considering a slower pace of fiscal consolidation so as to support growth in the near term,” Jardaneh said.

Economic output shrank in the first quarter by 0.5 percent. Non-oil industries expanded at an annual rate of 0.6 percent from 0.4 percent in the previous three months.

“Any additional stimulus measures will have a confidence-boosting effect,” said John Sfakianakis, director of economic research at the Gulf Research Center in Riyadh. “But it will take time to impact headline growth numbers as we already done with the first half of the year.”