EghtesadOnline: U.S. stocks sank Friday and the euro climbed to its highest level against the dollar since January 2015 as investors assessed an investigation into U.S. President Donald Trump that may stall his economic agenda. European shares fell as the common currency’s rally weighed on carmakers and other exporters. Oil slumped after reports that OPEC supply increased this month.

According to Bloomberg, all major U.S. equity gauges ended lower, with energy shares leading decliners in the S&P 500 Index. Industrials also struggled as General Electric Co. dropped 3 percent on the company’s warning that its earnings for the year will likely be at near the bottom of its projected range. The Bloomberg Dollar Spot Index hit a 14-month low.

Politics remained at the forefront in the U.S., with reports that special counsel Robert Mueller is expanding his investigation to include Trump’s business dealings and the president telling the New York Times that any digging into his finances would cross a red line. White House Press Secretary Sean Spicer resigned Friday as Trump namedfinancier Anthony Scaramucci communications director.

The euro gathered momentum following Thursday’s comments by European Central Bank President Mario Draghi that policy makers in the fall will discuss unwinding quantitative easing. Rising hawkishness from the ECB has helped the euro rally from lows last seen near the start of the millennium, with investors expecting tapering to start in the new year and pricing in a 10 basis point rate hike by September 2018. 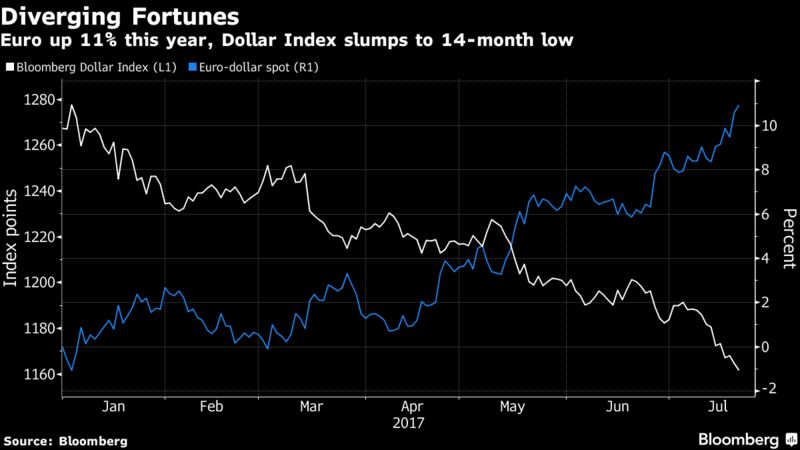 “Draghi tried to talk the euro down, even going so far as to suggest that ECB’s quantitative easing could be increased and prolonged,” said Yann Quelenn, a market strategist at Swissquote Bank SA. “But the currency markets were not buying Draghi’s line, and neither are we. Available bonds are too scarce, and turn to a taper is too clear to disguise.”