EghtesadOnline: Even as the S&P 500 Index clawed its way to a fresh record and squeezed out a third consecutive weekly gain, signs of fading enthusiasm in U.S. stocks have become increasingly difficult to ignore.

The latest can be seen in the SPDR S&P 500 Trust, the biggest exchange-traded fund tracking the U.S. equity benchmark. As of Thursday, investors had pulled $3.8 billion out of it in July. That puts the fund on pace for a fourth consecutive monthly outflow, which would be the longest streak since the start of the bull rally in 2009, according to Bloomberg. 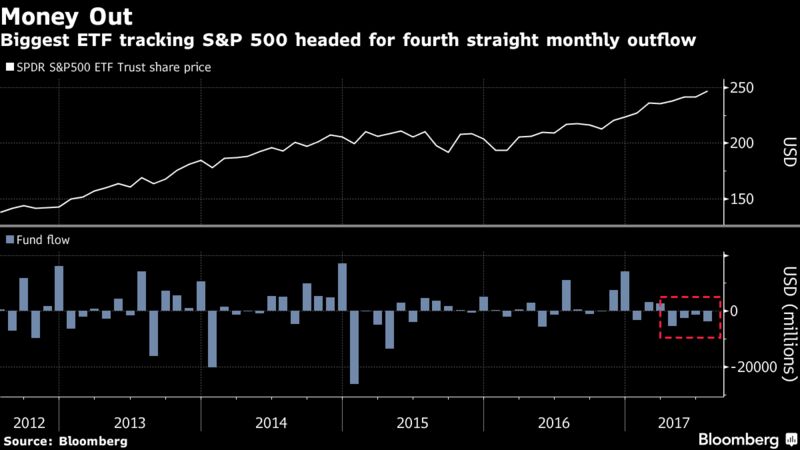 And it isn’t just the $237 billion SPDR fund that’s thinning. Traders took $2.1 billion out of U.S. mutual funds and ETFs in the week ended July 12, ICI data show. That compared with $5.1 billion that went into funds around the world. Bank of America Merrill Lynch’s most recent fund manager survey found allocation to U.S. stocks is the most underweight since 2008.

“We’ve contributed to that because we’ve been moving money out of large-cap stocks in the U.S.,” Ed Keon, managing director and portfolio manager at Quantitative Management Associates LLC, said by phone. “We’re not bearish, it’s just a question of better growth with lower valuations elsewhere.”

The S&P 500 touched new highs this week before retreating as an intensifying investigation into President Donald Trump stoked concern that his economic agenda may stall. The benchmark gauge added 0.5 percent in the five days to end at 2,472.54. The Nasdaq 100 Index jumped 1.4 percent, ending the week at a record 5,921.525. The Dow Jones Industrial Average slipped 0.3 percent to 21,580.07.

Strong earnings growth this year has kept the S&P 500’s price-to-earnings multiple below its March peak, despite the index reaching all-time highs. Even so, most equity valuations outside the U.S. remain more compelling. 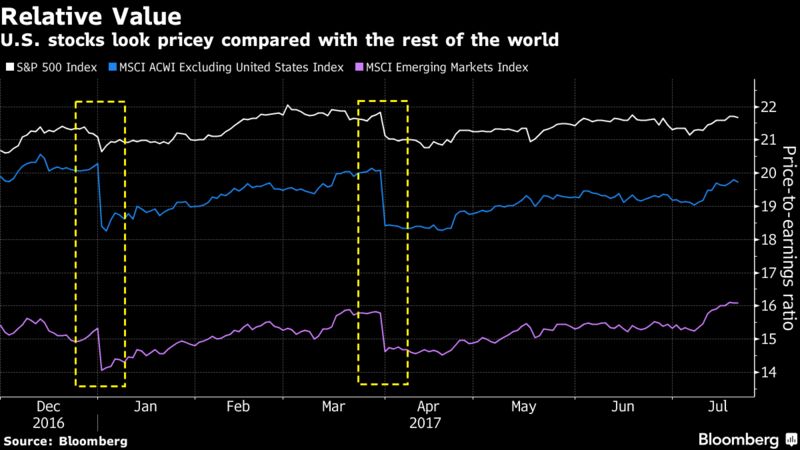 Technology stocks rallied for the fourth week in five as the Nasdaq 100 Index jumped 1.4 percent. Industrial and financial stocks weighed on the market.