The Great Rotation May Finally Be at Hand

EghtesadOnline: The great rotation may be near. Bets on the flow of money out of bonds and into stocks have misfired this year as low yields have kept the global debt party going. But there’s a sign markets may be on the cusp of a post-crisis shift: So far this year stocks have had a higher risk-adjusted return than bonds.

The rolling five-year return on global stocks has outpaced government debt over the past three months as weighted by the standard deviation of gains, according to Credit Suisse Group AG. That increases the chances of money flying into equities at the possible expense of debt, according to Bloomberg.

"Flows do follow performance, and we know U.S. retail investors are less valuation-sensitive than smart-money investors," Robert Griffiths, an equity strategist at the bank based in London, said in a telephone interview, referring to institutional investors. "The increase in total returns from stocks, if it continues over the next couple of quarters, raises the prospect of a tipping point in asset allocation in favor of equities." 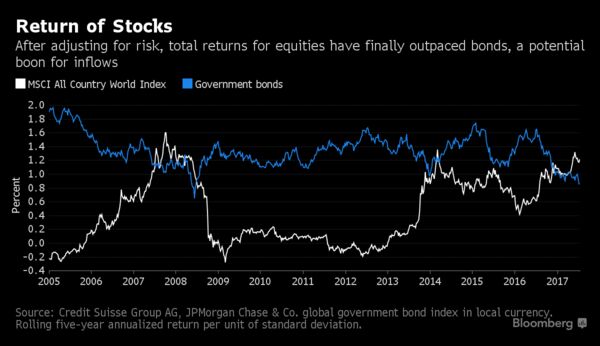 George Pearkes, a macro strategist with Bespoke Investment Group LLC, said: “Higher risk-adjusted returns for stocks should draw inflows, and we know from our work that Americans are relatively unexposed to the market.”

The outperformance of bonds since the financial crisis, risk aversion and regulations unfriendly to equities have helped create a preference for fixed income.

Global bond funds -- which include government and high-yield obligations -- have seen $1.3 trillion of net inflows since 2009, while stocks have taken in less than half of that at $600 billion, according to Jefferies Group LLC, citing EPFR Global data, which reflect holdings among mutual and exchange-traded funds.

In the first half of the year, bond funds took in $204 billion while stocks saw $167 billion of inflows. A $107 billion injection into fixed-income in the second quarter was the highest on record going back to 2002, Jefferies said. This happened despite fears of higher global yields.

Still, the technicals look good for flows into stock markets even as investors fret about valuations, according to Credit Suisse. Fewer gyrations in U.S. stocks this year should inspire pension funds and systematic traders who measure risk in terms of realized volatility to up their equity allocations at the expense of bonds, according to the bank.

The possible switcheroo may dwarf retail flows over the short term. Quantitative investors, like commodity trading advisers and risk-parity funds, hold around $900 billion of assets combined, the bank said. 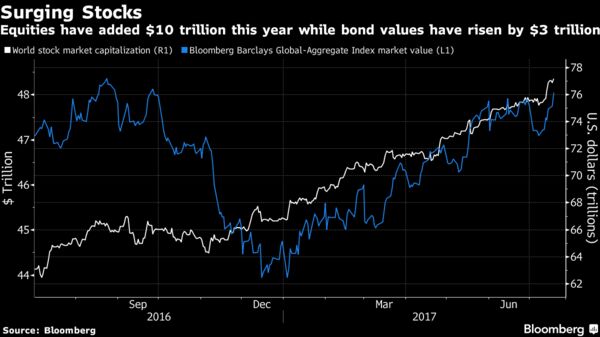 To be sure, market participants reckon debt flows will remain strong thanks to limited inflation, low returns on savings products and aging populations. What’s more, inflows into either asset class aren’t mutually exclusive thanks to a pool of excess savings.

But there still may be solace for stock bulls that have been flustered by the secular reduction to the asset class over the past decade.

"There’s not going to be a major bond-for-equity shift, and bond yields would need to reprice to a much higher level for that to happen," Griffiths said. "However, conditions for higher relative equity allocations haven’t been this good for a long while."