EghtesadOnline: Stocks pared recent gains and the dollar sat at an 11-month low as investors assess an investigation into the U.S. president that may stall his economic agenda. The Australian dollar plunged the most since May after a dovish speech by the central bank deputy governor.

European equity markets opened lower, echoing moves in Asia, while U.S. index futures were steady. The New Zealand dollar led G-10 currency gains against the greenback, hitting its highest since September after the country’s finance minister said the kiwi’s level reflected a strong economy. The euro continued to gain and was at its highest intraday level since Aug. 24. U.S. Treasuries and Australian bonds advanced, according to Bloomberg.

Global equities have continued hitting fresh highs this week amid corporate results that have reinforced faith in earnings and the economy. While it’s early in the U.S. reporting season, some 83 percent of companies have topped estimates on the bottom line. Asian shares are up more than four percent in the past two weeks, with markets in Japan and Hong Kong near two-year highs. 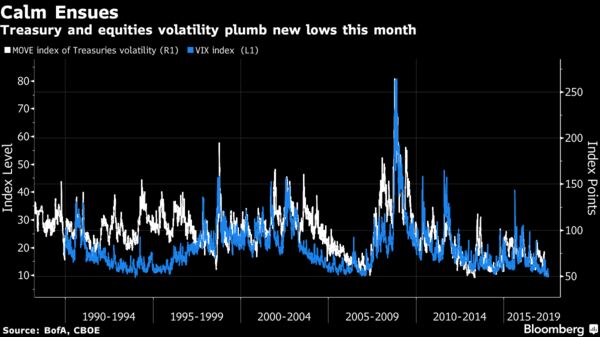 Politics in Washington are again at the forefront after central banks dominated proceedings earlier in the week, with reports that U.S. special counsel Robert Mueller is expanding his investigation of Donald Trump. The news came less than a day after the president told the New York Times that any digging into his finances would cross a red line.