Oil Producers Don’t Have a Plan to End the Glut

EghtesadOnline: OPEC and Russia’s plan to clear the global oil glut hasn’t worked as they hoped, but there’s little expectation the world’s largest producers will act more aggressively when they meet this weekend.

Oil has slumped into a bear market and inventories remain stubbornly high despite a deal between OPEC and 10 countries outside the group to cut output. The implementation of supply curbs is faltering as Libya and Nigeria restore lost production, according to Bloomberg.

The trouble for ministers meeting in St. Petersburg to review the progress of the deal is the alternatives look little better than the status quo. If the Organization of Petroleum Exporting Countries abandons the deal and increases oil output, a further plunge in prices would inflict more pain on their economies. And while deepening the production cuts would spark a rally, that might encourage even bigger flows from U.S. shale drillers. 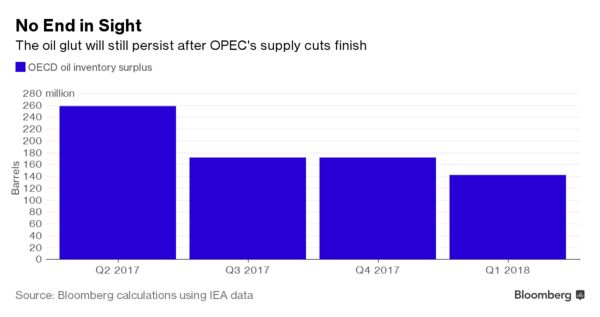 Oil prices have given up all their gains since OPEC and Russia assembled a coalition of producers in December to try and end the market’s two-and-a-half-year slump. Despite forecasts that the measures would reduce the world’s bloated oil inventories, that doesn’t seem to be happening, the International Energy Agency said on July 13.

The agreement between OPEC and its allies was undermined before it even started, as key producers such as Saudi Arabia, Russia and Iraq ramped up exports just before the deadline to cut output took effect. The pact faces a further challenge as Nigeria and Libya, which were exempt from cuts while they tackled political crises, recover output.

“The underlying problem is Libya and Nigeria combining to produce significantly more than anyone anticipated they would,” said Ed Morse, head of commodities research at Citigroup Inc. in New York.

While both nations have been invited to the St. Petersburg gathering, neither would be willing to reduce supplies even if they were asked, Morse said. Moreover, as both producers are near the limits of their capacity, any agreement to cap at current levels would merely be symbolic, he said.

Weakening compliance among other nations poses another challenge. Implementation by Iraq -- which says it shouldn’t have been asked to cut while suffering so much economic hardship and battling Islamic State jihadists -- has fallen to a low of 29 percent, according to the Paris-based IEA. Ecuador’s Oil Minister Carlos Perez said on Monday that his country was pulling out of the deal, before diluting those comments the following day.

The failure of the accord is driving Saudi Arabia to consider taking extra steps by itself, according to a report by consultants Petroleum Policy Intelligence, citing information from “key players” in OPEC. The kingdom’s exports would probably drop by 600,000 barrels a day this summer as local demand peaks, and it may deepen the reduction to 1 million a day, it said.

“OPEC has grown a bit weary of the negative sentiment, and Libya and Nigeria have made it impossible to get inventories down to the five-year average,” said Bill Farren-Price, founder of U.K.-based PPI. “We think they’re looking at options to speed up the rebalancing.”

Recent data suggest the extra effort is needed. At current production, OPEC’s curbs won’t achieve their stated aim of reducing inventories to average levels by the time they expire in April, according to Bloomberg calculations using IEA data.

Tightening supplies further would give an immediate boost to prices, but that just encourages U.S. shale producers to invest even more in drilling. Those shale drillers are on track to hit a record output of 5.58 million barrels a day in August, the U.S. Energy Department said on July 17.

“Every few dollars that the price does begin to rise, it incentivizes more oil from the U.S.,” Neil Atkinson, head of the IEA’s oil markets and industry division, said in a Bloomberg television interview.

Yet the threat posed by shale is what will hold the flawed deal together, according to Paolo Scaroni, vice-chairman of NM Rothschild & Sons and former chief executive officer of Italian oil giant Eni SpA.

“This is the game changer for everybody,” Scaroni said. “The situation is so difficult for them that I’m convinced any agreement in OPEC has more chances than before. They have no alternative.”