EghtesadOnline: Oil bulls grappling with OPEC’s weakened resolve to curb output are also having to worry about waning demand in the world’s biggest buyer of overseas crude.

State-run China Petroleum & Chemical Corp., the globe’s largest oil refiner, will process about 1 million metric tons a month less than previously planned over June to August, according to people with knowledge of the matter. That’s because of weaker demand and increased competition from privately owned rivals, they said, asking not to be identified because the information is confidential. The reduction is equivalent to about 240,000 barrels a day, Bloomberg reported.

While that’s about 3 percent of China’s total crude imports, the curbs are being implemented during the summer, when the nation’s demand typically peaks just as it does in the U.S. Chinese drivers typically use more fuel as they crank up their vehicle’s air-conditioner when the sun is out, but are turning to alternative modes of transport such as natural-gas fired cars amid efforts to cut pollution. Oil is still in a bear market as some OPEC members comply less with pledged output cuts.

“The oil market seems to have grown immune to news about OPEC output cuts, meaning supply-side stories that normally affect prices aren’t having as much impact now,” Gao Jian, an analyst with Shandong-based industry researcher SCI99, said by phone. “It’s time to look over to the demand side. And on that front, with China’s fuel demand weakening, it basically means oil may stay lower for longer.”

U.S. West Texas Intermediate is trading near $46 a barrel in New York, still more than 50 percent lower than three years earlier as a global market glut persists. Brent crude, the benchmark for more than half the world’s oil, is languishing near $49 a barrel, compared with its 2014 peak of more than $115. 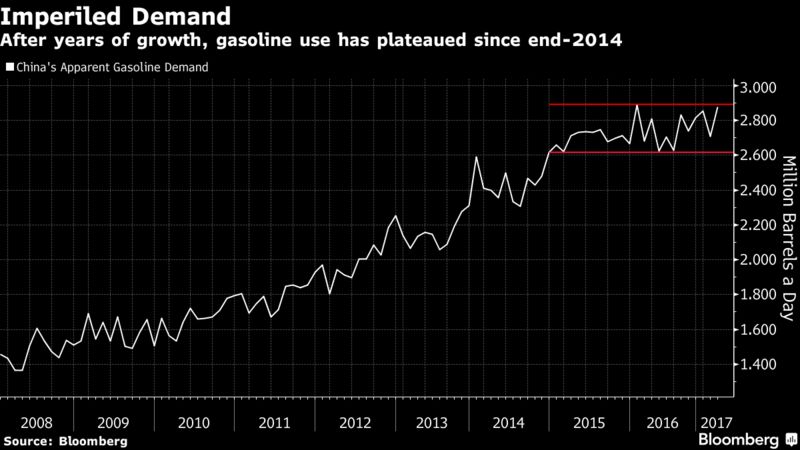 While the Organization of Petroleum Exporting Countries and its partners have an agreement to implement output curbs aimed at shrinking the oversupply and propping up prices, the International Energy Agency estimates that OPEC’s compliance with the cutbacks fell in June to the lowest level since the deal started in January. Any sustained rebound in prices will hinge as much on continued growth in China as on reduced supplies.

Before the lower processing plan, China Petroleum & Chemical Corp. had a target to process about 20 million tons a month during summer. A Beijing-based spokesman for the company that’s known as Sinopec declined to comment.

Gasoline demand growth in China, the world’s biggest energy user, will average95,000 barrels a day in 2017, “dramatically” below gains of 230,000-290,000 barrels a day of the prior two years, the Paris-based IEA said in a report on July 13. Meanwhile, passenger-vehicle sales in the first half dropped for the first time in at least 13 years.

“Fuel demand in China is being challenged by alternative transportation such as shared bicycles and natural gas fired cars,” said Guo Yifan, an analyst at Shanghai-based Sinolink Securities. She predicted the use of shared bikes in big cities may replace 1.27 million tons of gasoline demand this year while natural gas cars have already displaced 22 million tons of fuel used in transportation in 2016.

The IEA last month cut its estimate for China’s 2017 total oil demand growth by 4 percent to 385,000 barrels a day. The nation’s apparent oil demand fell by 0.3 percent in April, with gasoline demand slipping by 6.3 percent, the first decline since September, according to data complied by Bloomberg.

“Summer in theory should be the peak consumption season,” said Amy Sun, an analyst with Shanghai-based commodities researcher ICIS-China. “But we’ve seen weak gasoline demand since April as well as huge competition from teapots,” she said, referring to the nation’s smaller, independent refiners.

Operating rates at Chinese independent refineries rose to 65.14 percent in mid-June, the highest since December, according to data provided by SCI99. Sinopec raised its refining volume each year since 2005 until 2016, when the private processors started boosting operations armed with government approvals to purchase imported oil. Since May, Sinopec’s fuel stations have offered a discount of as much as 2.3 yuan per liter in the eastern Chinese city of Zibo, Shanghai Securities News reported last month.