EghtesadOnline: Deep within the Treasury Department sits a once-secret plan written by the Obama administration that could lead to the first-ever default on U.S. debt. Bond traders are worried that Donald Trump’s Treasury secretary may have to use it.

According to Bloomberg, the U.S. government will reach its statutory limit on borrowing some time in October, the Congressional Budget Office estimates. The Trump administration has asked Congress to raise the ceiling before then, but it is running into the same complications the Obama White House encountered: lawmakers, mostly Republicans, who want to use the debt limit as leverage for controversial policy changes.

Treasury Secretary Steven Mnuchin has said there are “plans and backup plans” to keep the government solvent through September. Bond traders suspect he is referring to preparations made in 2011 in case the Obama administration had to prioritize payments on government securities over other obligations. The Treasury chief got fresh hope that Congress may raise the debt limit before leaving for its August recess after Senate Majority Leader Mitch McConnell delayedthe break by two weeks.

When the nation almost breached its debt ceiling six years ago, the Federal Reserve and Treasury drew up contingency plans that were kept secret until January, when transcripts of an Aug. 1, 2011 conference call at the central bank were released after a customary five-year lag.

One day before protracted negotiations concluded with Congress raising the debt ceiling, Fed officials were briefed about how its staff and Treasury officials had worked together to develop a plan to handle debt payments in the event they had to be “prioritized or at least not fully paid,” the transcripts say.

Under the contingency plan, holders of U.S. debt and recipients of social security, veterans benefits and other entitlements would be paid first. Everyone else, such as government contractors and federal employees, would be at risk of payment delays or partial payments.

Though the scenario nominally protects holders of U.S. debt by prioritizing the payments they are due, it raises fears that the value of their underlying assets could suddenly decline if the U.S. government’s reputation for creditworthiness is damaged.

“I’m assuming that prioritization is the fallback,” said Lou Crandall, chief economist at Wrightson ICAP LLC. The acknowledgment in the Fed transcripts of the existence of a backup plan to pay interest first makes it more plausible, he said, calling it a “truly terrible idea.”

It was in 2011 that U.S. debt was downgraded for the first time by S&P Global Ratings. If the secret debt prioritization plan has to be used by the Trump administration, the nation’s credit rating may well be downgraded again, some analysts say.

Even the existence of the 2011 backup plan is contested. Some former Treasury officials who worked at the department at the time say that by design there was no plan. The agency may have used a legal distinction to avoid appearing to have created a backstop by never asking its general counsel if prioritization was legal, one former Treasury official said.

Mnuchin said in his January confirmation hearing that he would not prioritize debt payments, should the borrowing limit be breached. But more recently, he has demurred.

“Congress should raise the ceiling so that we don’t have to talk about prioritization,” he said in a June 20 Bloomberg TV interview, declining to directly answer a question about the possibility. However, he has consistently said the U.S. “should be paying our bills when they’re due and we shouldn’t put the government at risk.”

In response to questions about the Treasury’s position on prioritization, a spokeswoman referred to Mnuchin’s previous comments urging Congress to raise the debt ceiling quickly and insisting that the U.S. should pay its debts on time. Fed board spokesman David Skidmore declined to comment.

Under the prioritization plan described in the 2011 transcripts, Treasury would make all semi-annual coupon payments on debts in part by using monies built up by deferring other obligations. The government would auction new debt at regularly scheduled times only to fund old debts that matured. 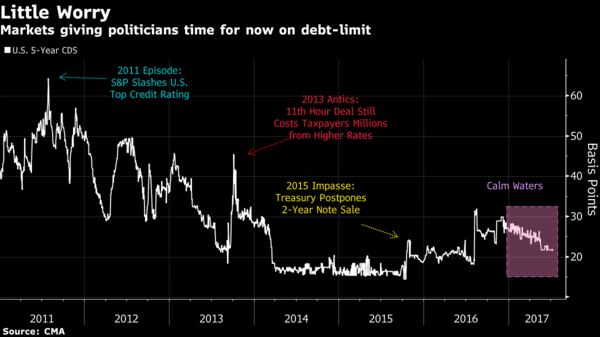 The Fed, as the fiscal agent of the Treasury, was concerned about matters including how to handle handle settlement of debt transactions if the ceiling wasn’t lifted, and had pushed Treasury to work out the mechanics. The central bank had run “tabletop exercises” related to prioritization contingency plans as early as March 2011, according to Fed records obtained and outlined in a 2016 report by the House Financial Services Committee.

If Treasury -- which has seen its marketable debt balloon to $14 trillion -- had to employ the plan now, it would mean that in November alone the government would have to sell $48 billion less in coupon-bearing debt, according to Steve Kang, a strategist at Citigroup Inc. That would pressure long-term debt yields lower, he said.

Prioritizing U.S. debt is a contentious issue, with no consensus over whether it constitutes a default. Former Treasury Secretary Jacob Lew called it “default by another name” while in office. Fitch Ratings disagrees, but says it would trigger a review of whether the U.S. still warrants a AAA rating.

Moody’s Investor Service, which considers it likely that the government would use the plan if the Treasury exhausts extraordinary measures to stay under the ceiling and Congress doesn’t act, seems comfortable with it. The agency says that the economic disruption that could erupt would expedite a political compromise to end the impasse.

There is little support for prioritizing debt payments in Congress, with Oklahoma Republican Tom Cole, a member of the House Budget Committee, calling it a “harebrained scheme that is apt to backfire.”

“Proposing to pay interest to the Chinese first, while stiffing American businesses and households that are owed payments by Treasury, hardly seems like a winning political strategy,” Wrightson’s Crandall said. “We’re not sure how the market would respond to that kind of payments twilight zone.”

Still, markets are signaling little concern that negotiations in Congress will be so heated. Republican leaders have insisted that they will act to raise the debt ceiling in plenty of time, although the path forward remains murky. Conservatives have demanded steep spending cuts in return for their votes, and Democrats -- who will almost certainly have to help raise the borrowing ceiling -- have said they would reject such conditions.