EghtesadOnline: OPEC needs to “shock and awe” the oil market for prices to gain, according to Goldman Sachs Group Inc.

The Organization of Petroleum Exporting Countries must increase output cuts aimed at shrinking a global glut with little public announcement in order to jolt investors, the bank said in a July 10 report. Without such action and no evidence of sustained declines in inventories as well as U.S. drilling activity, prices could slump below $40 a barrel, analysts including Damien Courvalin and Jeffrey Currie wrote in the note. 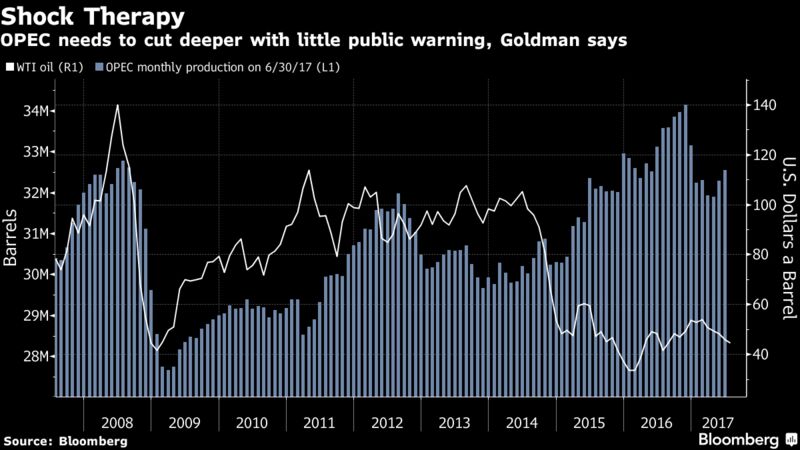 According to Bloomberg, Goldman is flagging the risk of a further drop in oil after the bank late last month cut its three-month forecast for U.S. benchmark West Texas Intermediate crude to $47.50 a barrel from $55. Subsequently, it acknowledged in a separate report that it misjudgedthe commodities market this year. OPEC production and exports increased in June, driven by Libya and Nigeria that are exempt from the group’s output curbs, while rising U.S. supplies and drilling activity have weighed on prices.

U.S. explorers put more rigs to work drilling for oil in the U.S. last week, reversing a one-week decline and reinforcing fears that OPEC won’t be successful in its efforts to ease a global oversupply. U.S. output in the week through June 30 increased by the most since January, offsetting a decline in crude stockpiles.

“Given that the market is now out of patience for large stock draws and increasingly concerned about next year’s balances, we believe that price upside will need to be front-end driven, coming from observable near-term physical tightness and signs of a U.S. shale activity slowdown on a sustained basis in coming weeks,” the Goldman analysts wrote in their latest report.

West Texas Intermediate futures were down 0.6 percent at $44.14 a barrel on the New York Mercantile Exchange by 10:59 a.m. London time. Brent crude, the benchmark for more than half the world’s oil, slipped 0.6 percent to $46.59 in London.

Libya and Nigeria have sustained production above Goldman’s expectations over the past few weeks, they said. “While OPEC has yet to address this increase in production, the group has invited both countries to participate in the next compliance committee,” the analysts wrote. “We continue to believe that there is another opportunity for OPEC to increase the cuts, but that this should be done in a “shock and awe” manner, with little public announcement.”

Deeper cuts are currently not on the agenda, according to OPEC Secretary-General Mohammad Barkindo. Still, the group and other nations have invited Libya and Nigeria to a July 24 meeting in St. Petersburg, Russia, on July 24 to discuss the stability of their production, according to Issam Almarzooq, Kuwait’s oil minister.