Futures fell 3.9 percent, even after U.S. data on Thursday showed the nation’s crude stockpiles dropped by 6.3 million barrels, three times as much as expected. U.S. drillers went back to adding rigs this week, after breaking a record streak of expansion. Investors remain doubtful that OPEC-led production cuts will clear a global glut as Russia and Saudi Arabia appear to be less committed than earlier in the year, while U.S. production has been rising for most of this year, Bloomberg reported. 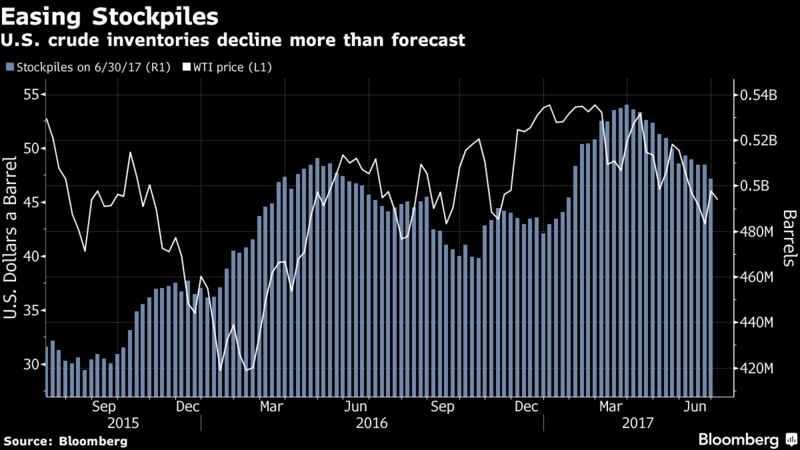 Oil’s longest rally in 2017 faltered this week after Russia was said to oppose deepersupply cuts by the Organization of Petroleum Exporting Countries and its partners. Saudi production increased in June by the most in almost a year, according to a Bloomberg survey. The oversupply concerns have kept futures below $50 a barrel for the past six weeks.

“Oil remains volatile, unable to hold onto gains even after strong inventory draws in the U.S.,” said Jan Edelmann, an analyst at HSH Nordbank AG in Hamburg. “While the strong draws are a step in the right direction, multiple weeks of the same are now needed for the rebalancing.”

Brent for September settlement closed $1.40 lower at $46.71 a barrel on the London-based ICE Futures Europe exchange. Prices are down 2.5 percent this week. The global benchmark traded at a premium of $2.32 to September WTI.

U.S. crude production increased by 88,000 barrels a day last week to 9.34 million, the EIA said in a report Thursday. Output had slid by 100,000 barrels a day through June 23 because of field maintenance in Alaska and the impact of tropical storm Cindy. Gasoline stockpiles fell by 3.7 million barrels.

Russia wants to stick to the current OPEC deal and would oppose any proposal for deeper production cuts at the group’s ministerial meeting later this month, four Russian government officials said this week. Russia remains willing to weigh any proposals from its allies at the summit in St. Petersburg, the Energy Ministry said in a statement Friday.