EghtesadOnline: Equities slipped, with European shares extending the longest run of weekly losses in a year as U.K.-listed stocks struggled on the anniversary of Britain’s vote to leave the European Union. Oil was poised for a fifth week of decline as a supply glut shows no sign of ending.

The benchmark Stoxx Europe 600 gauge dropped for a third week, with food and beverage companies among the biggest losers after Stifel Financial Corp. downgraded brewer Heineken NV’s stock. Shares in the U.K. were were set for a fourth day of losses even as the pound pared its weekly decline with Brexit negotiations under way. The dollar headed for its first weekly gain since May after Federal Reserve speakers did little to alter projections for the path of interest rates, Bloomberg reported. 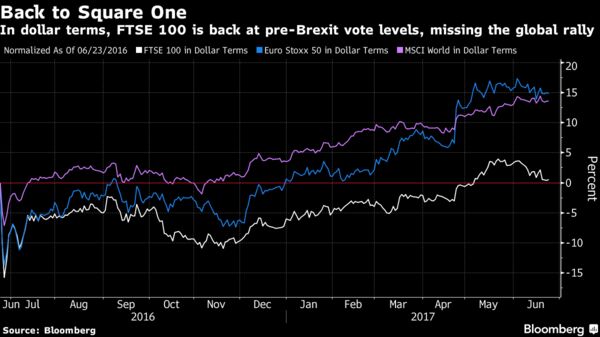 Weakness in energy prices were the theme of the week, with oil in New York and London dropping into a bear market on concerns that expanding supply in the U.S. and Libya will counter output cuts from the Organization of Petroleum Exporting Countries. In Europe, the battle lines over negotiations to untangle Britain from the union have been drawn, with residency rights and clearing of euro-denominated financial instruments among the first issues making headlines.

“As a heatwave engulfs Europe, equities may suffer from sticky conditions near-term,” Bank of America Merrill Lynch strategists including Ronan Carr said in a client note Friday. “Slowing cyclical momentum, weak oil and policy uncertainty could cause a wobble.”

Here are some upcoming events investors are watching: