Oil Lingers Below $43 After Entering Bear Market on Glut Worries

EghtesadOnline: Oil closed below $43 a barrel for a second day as brimming supplies work against OPEC-led efforts to reduce a glut.

Futures edged up 0.5 percent in New York after losing nearly 5 percent since the start of the week. A report Wednesday from the Energy Information Administration showed U.S. oil production increased to the highest since August 2015. A committee of OPEC and non-OPEC members meeting in Vienna this week is said to have wrestled with the issues of increasing production in Libya and Nigeria, coupled with soaring U.S. output, bloomberg reported. 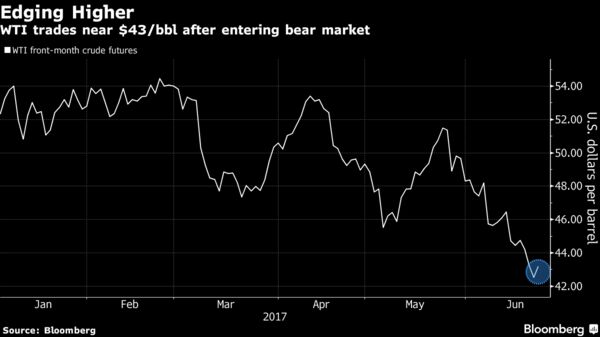 Crude plunged into a bear market this week amid concerns that rising global supply will outweigh production cuts from the Organization of Petroleum Exporting Countries and its partners including Russia. Kuwait Oil Minister Issam Almarzooq thanked OPEC and non-OPEC producers that are complying with pledged cuts, while asking other countries to make more of an effort "to help the agreement succeed.”

Oil’s small gain Thursday is more due to “the fact that we’ve come off quite a bit and we’re catching our breath here a little bit,” Harry Tchilinguirian, head of commodity markets strategy at BNP Paribas SA in London, said by telephone. OPEC’s agreement to extend output cuts through the first quarter of 2018 forces members to comply, he said. “What the market is actually fixated on is signs whether or not this compliance is having an effect in terms of the visible inventory data.”

West Texas Intermediate for August delivery rose 21 cents to settle at $42.74 a barrel on the New York Mercantile Exchange. On Tuesday, futures closed more than 20 percent below their peak settlement for the year, meeting the common definition of a bear market.

Brent for August settlement climbed 40 cents to end the session at $45.22 a barrel on the London-based ICE Futures Europe exchange. The global benchmark closed at its lowest since Nov. 14. on Wednesday, also entering a bear market. It traded at a premium of $2.48 to WTI.

“Part of what the market is still seeking is some further commitment from OPEC to production cuts or other talk around that after some of these big declines,” Rob Haworth, senior investment strategist at U.S. Bank Wealth Management in Seattle, which oversees $142 billion of assets, said by telephone. “We’re also likely seeing managed money positions and speculators liquidate, so there’s usually just a little pause afterward.”

OPEC and non-OPEC compliance to its output-reduction deal was 106 percent in May, OPEC said in a statement on its website. At talks in Vienna this week, producers focused on how to deal with rising output from Libya and Nigeria, rather than deepening cuts by other members, according to delegates familiar with the talks. The resilience of U.S. shale was also a conversation topic. The next Joint Ministerial Monitoring Committee meeting will be held in St. Petersburg, Russia on July 24.

Libya is pumping the most oil in four years, an official at the National Oil Corp. said earlier this week, while in Nigeria, a major export terminal restarted after a 15-month halt caused by sabotage.

U.S. oil production rose by 20,000 barrels a day last week to 9.35 million, according to the EIA report. Crude stockpiles slid by 2.45 million barrels and gasoline supplies fell by 578,000 barrels. Drillers in the U.S. have brought oil rigs online for 22 straight weeks.

“The low $40s is something the Saudis have attempted to defend. In the past couple of years, it’s somewhere where we’ve seen production growth and investment in wells start to taper off,” Haworth said. “We’re somewhere close to an area where the fundamentals of U.S. production are likely to shift and that will provide some support to prices eventually.”