Remember the Stunning Dollar Rally in 2014? It's Euro's Turn

EghtesadOnline: You may think the reflation trade is dead. Actually, it’s simply traveled across the Atlantic.

Instead of betting on the dollar and better economic growth in the U.S., currency investors are coming to terms with the possibility that the dollar’s best days are behind it after three years of record-breaking strength. More and more, traders are starting to count on the euro to take the dollar’s place as the overarching trade of the $5.1 trillion market, Bloomberg reported. 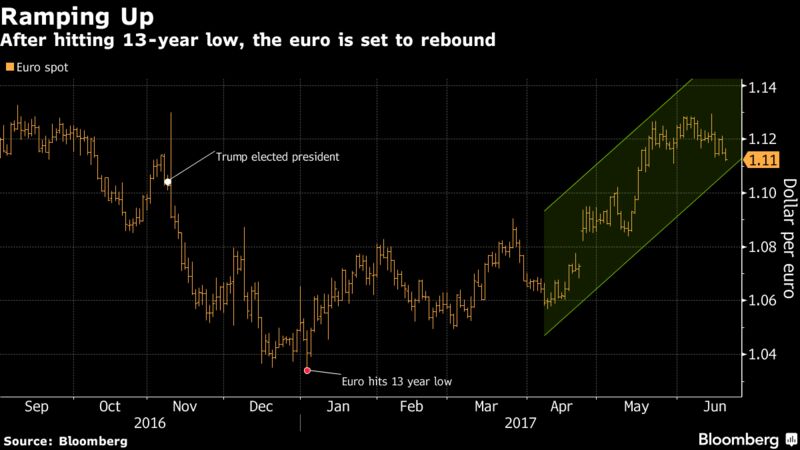 At first glance, the euro seems like an unlikely candidate to be the outperformer: The region has a negative deposit rate, and the European Central Bank buys bonds every month to support asset prices and the economy. But with fading political risks, a recovering economy and economists starting to see the scaling back of quantitative easing on the horizon -- just like they did for the Federal Reserve in 2014 -- the euro may begin a multi-year appreciation that’s a copycat of the dollar.

“There’s been a complete flip over from this total optimism from the day we had the U.S. election where everyone was dollar bullish, politically bullish, cyclically bullish,” said David Bloom, head of currency strategy at HSBC Holdings Plc, in a Bloomberg Television interview. “You sit here today -- that’s the attitude of Europe and not the United States.”

HSBC isn’t alone. Investors piled into the euro this quarter, helping it gain against almost every major currency, a feat it hasn’t accomplished since 2013. Meanwhile, the dollar fell versus the majority of counterparts.

Analysts surveyed by Bloomberg are ratcheting up their forecasts to keep up with the euro’s rise this year. The shared currency is already up 5.9 percent year-to-date, after plunging 6.4 percent in the fourth quarter amid optimism for the pro-growth policies championed by Donald Trump.

Like the dollar, a “similar thing could also happen to the euro,” said Thomas Flury, head of foreign-exchange research at UBS Wealth Management in Zurich. “Particularly when the ECB is urged to stop QE because the economy is too strong right now, with respect to trade surplus manufacturing, and consumer sentiment to justify an extension of QE.” 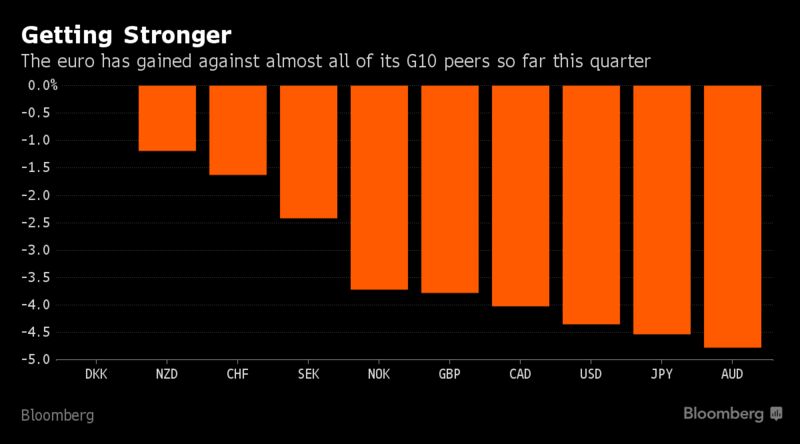 Even though betting on the euro’s rise against the dollar may be the most obvious trade, given it’s the world’s most-transacted currency pair, investors may have better luck buying the single currency against the yen, another currency that’s also held down by negative interest rates.

The euro has strengthened 7.6 percent against the yen in the past two months, a rally that’s bigger than any major dollar pairs. Analysts ratcheted up their end-2017 euro-yen forecasts at the fastest pace ever last month, while the lack of mention by the Bank of Japan of any timing regarding tapering last week drove the pair near the highest in 14 months.

“There’s less upside for the dollar-yen than there is for the euro-yen,” said Kit Juckes, fixed-income strategist at Societe Generale SA. “The euro has been held down by aggressive ECB policies, and as the focus shifts slowly to normalization, it’s like a jack-in-the-box when the lid starts opening.”