EghtesadOnline: Oil fell for a third week as rising supplies from the U.S. to Nigeria to Libya showed that OPEC is still struggling to clear a global glut.

Futures fluctuated in New York Friday, trading at the sub-$50 levels seen before OPEC first agreed to curb output in November. U.S data released Wednesday showed total crude and product stockpiles rose by the most since 2008 last week, surprising a market that had been expecting further declines. American output is also seen surging in 2018 to a record above 10 million barrels a day. In Nigeria, Royal Dutch Shell Plc lifted restrictions on exports of a key grade halted for more than a year, according to Bloomberg. 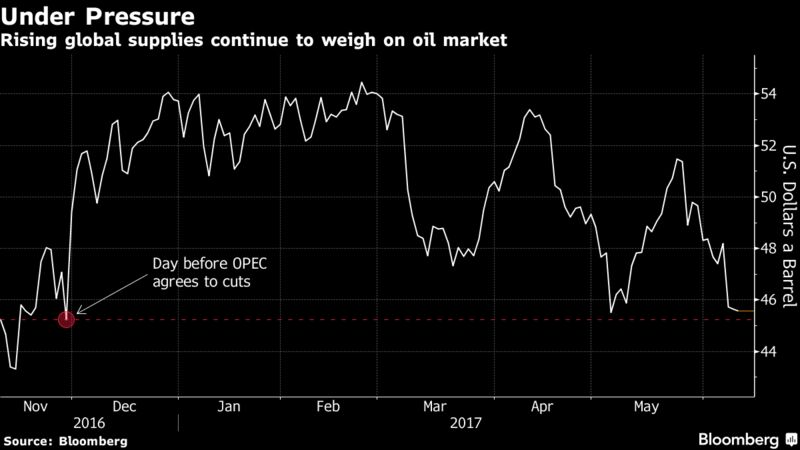 Oil has largely given up its gains after the Organization of Petroleum Exporting Countries and its allies including Russia agreed late last year to curb output. A persistent glut amid a ramp-up in U.S. production this year has kept prices under pressure. Even this week, the oversupply has kept oil in check amid turmoil in the Middle East, the world’s largest producing region, as a Saudi Arabia-Qatar diplomatic feud flared and suicide bombers struck Iran’s capital Tehran.

“This is a market that I think speculators have been hoping will return to normal very quickly and prices will rally strongly. The problem is, fundamentals are not cooperating very quickly,” Rob Haworth, senior investment strategist in Seattle at U.S. Bank Wealth Management, which oversees $142 billion of assets, said by telephone. “There has been a lot of hope that demand will expand more rapidly and that supplies will come in quickly. Neither has been the case.”

West Texas Intermediate for July delivery increased 19 cents to settle at $45.83 a barrel on the New York Mercantile Exchange. Futures fell 3.8 percent this week. Total volume traded was about 9 percent above the 100-day average.

Brent for August settlement rose 29 cents to end the session at $48.15 a barrel on the London-based ICE Futures Europe exchange. Prices are down 3.6 percent this week. The global benchmark crude traded at a premium of $2.08 to WTI for August.

Libya resumed production at the Sharara oil field, the nation’s biggest, and output will reach normal levels within three days, National Oil Co. said on its website. It closed Wednesday after a protest by workers, according to a person with direct knowledge of the matter.

The U.S. oil rig count climbed by 8 to 741 rigs, the highest level since April 2015 and the 21st consecutive weekly increase, according to data published Friday by Baker Hughes Inc.

“We’ve gone down pretty much since the OPEC extension. That was kind of the game-changer,” Phil Flynn, senior market analyst at Price Futures Group in Chicago, said by telephone. “This has been the most vicious battle between the bulls and the bears. Obviously, the inventory draws haven’t happened as quickly” as the bulls would like.