EghtesadOnline: A crack has finally formed in the foundation of the U.S. bull market. Now investors must decide if any structural damage has been done.

This year’s hottest stocks, companies from Facebook Inc. and Apple Inc. to Netflix Inc. and Nvidia Corp., buckled Friday, spurring losses that sent the Nasdaq 100 to its biggest rout relative to the Dow Jones Industrial Average since 2008. Accounts of what spurred it ranged from bearish tweets by a short seller to a cautious note from Goldman Sachs Group Inc.

In its most benign interpretation, the selloff was merely a rotation, counterbalanced by rallies in industries such as banks, energy producers and retailers. But the reversal was enough to spur soul searching among bulls who have watched the market value of Apple, Alphabet Inc., Microsoft Corp., Amazon.com Inc. and Facebook increase by $500 billion since December, according to Bloomberg.

“We are probably going to see additional selling pressure on some high-momentum stocks that have spearheaded the rally,” said Chad Morganlander, a money manager at Stifel, Nicolaus & Co. “Stocks have become overbought.”

Even with the decline, the Nasdaq 100 remains up 18 percent in 2017, more than twice as much as the S&P 500, and trading at a significant valuation premium. The index’s price-earnings ratio was 26.1 as of Friday’s close, more than four percentage points above the broader gauge. That’s the widest gap in more than a year. 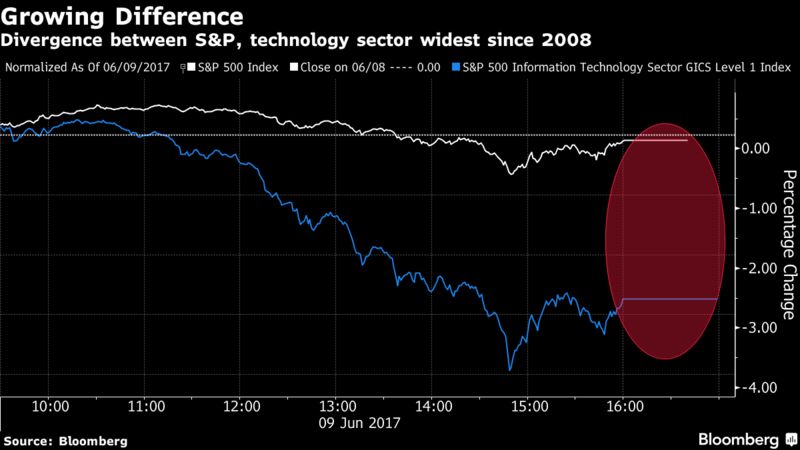 “It’s too early to tell,” she said. “I am watching what happens on Monday.”

Friday’s losses were significant in the tech space. Even as the Dow eked out an 89-point gain in New York, the Nasdaq 100 slid 2.4 percent, trimming a decline that at one point reached 3.8 percent, the most in a year. The Philadelphia Stock Exchange Semiconductor Index slumped 4.2 percent and at one point was down 6.1 percent, the most since 2014.

Within the S&P 500, tech shares also trailed the full index by the most since 2008 as investors took profit in an industry whose gains this year through Thursday had almost tripled the S&P 500. Traders cited a rotation out of technology and into banks and energy, the biggest losers in 2017, driving up those groups up at least 1.9 percent.

Perhaps the worst moment for bulls came just before 3 p.m. in New York, when already-weakened shares of Amazon.com plunged almost 5 percent in a matter of seconds, only to quickly recoup their losses. Less pronounced swoons were visible around that time in charts of Apple, Netflix and Facebook.

Sentiment was shaken early in the day when Robert Boroujerdi, Goldman’s global chief investment officer, warned that low volatility in Facebook, Amazon, Apple, Microsoft and Alphabet may be blinding investors to their risks. Those include cyclicality, tech disruption and regulation, which could exacerbate downside volatility should market conditions change.

It didn’t help when Andrew Left of Citron Research tweeted about “frenzied casino action” in Nvidia. The Santa Clara, California-based chipmaker, up 50 percent year-to-date through yesterday, lost 6.5 percent and was earlier down almost 11 percent, the most since May 2011. It ended the day with the worst loss in the S&P 500.

Julian Emanuel, a strategist at UBS Group AG, was more optimistic. Despite the potential for a summer setback for technology shares, the long-term picture remains upbeat, Emanuel, who is overweight tech stocks, said in a note Friday. What could give investors pause is a surge in inflows, expanding multiples, he said.

Still, concern remains that the valuations of technology firms have gotten too rich. Amazon, Facebook, Apple have added at least 29 percent this year, compared with a 8.6 percent gain in the S&P 500.

“People have focused too much on market-share gains of the largest names but have forgotten that technology is cyclical,” said Ilya Feygin, senior strategist at WallachBeth Capital. “Valuations in the tech sector are too high. It has a long way to go in underperformance.”