EghtesadOnline: A selloff in technology shares spoiled an otherwise buoyant day in the U.S. stock market as companies from Apple Inc. to Nvidia Corp. tumbled. The British pound dropped as the U.K.’s ruling Conservative Party lost its parliamentary majority, plunging the country into uncertainty just days before Brexit negotiations were due to start.

Sterling fell the most in eight months as the election intended to strengthen Prime Minister Theresa May’s hand in negotiations with the European Union instead left her battling to survive. The currency’s retreat gave British stocks a boost, as the FTSE 100 Index gained around 1 percent. U.K. bonds rose.

The U.K. vote capped a series of major events this week -- including former FBI Director James Comey’s testimony before the Senate Intelligence Committee on Thursday -- that passed with relatively little fuss. Attention will now turn to the week ahead, when the Fed is expected to raise interest rates and the Bank of England, the Bank of Japan and the Swiss National Bank also meet. 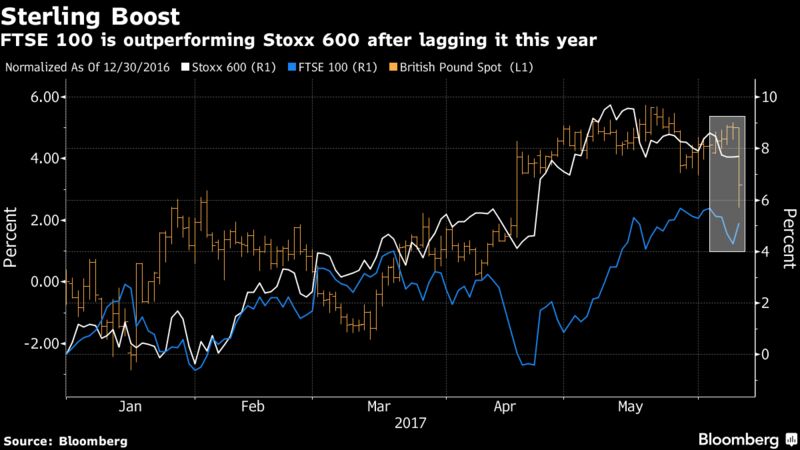 “For now, the results of the U.K. elections do not appear to be threatening the global growth story,” Mark Haefele, global chief investment officer at UBS Group AG, said in a note to clients. But for Britain,“political uncertainty is likely to more than offset any benefit from a marginally weaker pound,” he said.

Here’s what investors will be facing next: