Gold Makes Run Toward $1,300 as Risk Flares From U.K. to Mideast

EghtesadOnline: Gold’s taking aim at $1,300 an ounce. The metal has rallied to the highest since November as investors position themselves for the outcome of the U.K. election and potential drama of former FBI Director James Comey’s testimony, while also tracking tensions in the Middle East.

Bullion for immediate delivery was at $1,291.98 an ounce at 11:34 a.m. in Singapore, holding near Tuesday’s intraday peak of $1,296.15, the highest level since Nov. 9, according to Bloomberg generic pricing. The gains have also been supported by a fall in the dollar, which has sunk to the lowest since October.

According to Bloomberg, gold is 13 percent higher in 2017, and a Bloomberg survey this week signals more gains. The latest leg up has been supported by rising haven demand as U.K. voters head to the polls on Thursday, with the result set to dictate how the country handles Brexit. The same day, Comey appears before a Congressional panel to testify about his probe into President Donald Trump campaign’s ties to Russia, while the European Central Bank issues a policy decision.

“The two main drivers of gold are the value of the U.S. dollar and uncertainty,” said Jeffrey Halley, market strategist at Oanda Corp. in Singapore, referring to the Middle East tensions, the ECB decision and the U.K. election. “We have both in abundance at the moment. The double whammy has seen traders pile into gold and, given the power of the rally this week, I can’t see any other outcome than a test of $1,300 sooner rather than later.” 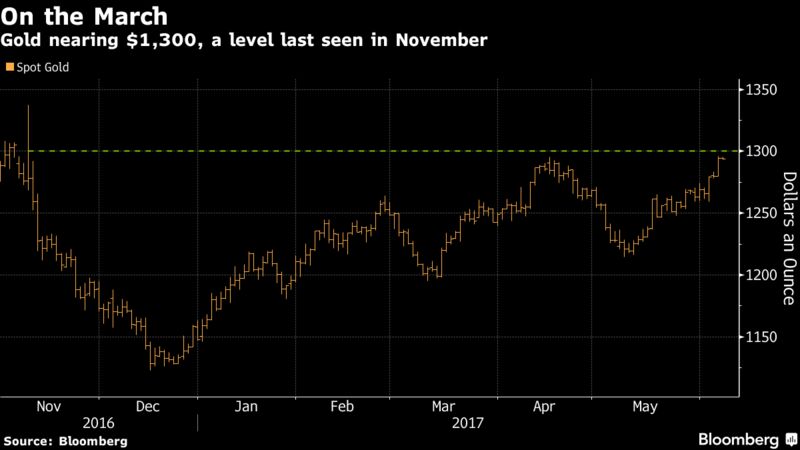 Saudi Arabia, the United Arab Emirates, Bahrain and Egypt severed ties with Qatar on Monday citing its support for rival Iran and for extremist groups. The crisis pits U.S. allies against each other, disrupting trade, flights and business activity in one of the world’s most strategically important regions.

Gold may end the year at $1,350 an ounce, according to the median estimate of 15 people surveyed at a conference organized by the Singapore Bullion Market Association this week. Twelve respondents were bullish, citing the global geopolitical uncertainty that continues to weigh on market sentiment.

While gold has rallied, investors remain mindful that the Federal Reserve is expected to raise rates again next week, adding to increases in December and March. Still, beyond that hike, the Fed isn’t going to be overly aggressive, according to TD Securities. A gauge of the dollar has lost 6 percent this year.

“The amount of uncertainty in the world has increased,” said Avtar Sandu, Asian commodities manager at Phillip Futures Pte. “Despite the rate hike expected in June, the markets are pretty strong. Going forward, it’s a matter of how many hikes there are going to be and when. We just expect one more, maybe in December.”

Shares of miners are reflecting the gain in prices since the start of 2017. Newcrest Mining Ltd., Australia’s largest producer, rallied as much as 2.2 percent to A$22.10 in Sydney trading on Wednesday, and is 7.8 percent higher this year. In Hong Kong, Zijin Mining Group Co. climbed 2.3 percent.