EghtesadOnline: Oil tankers shipped the most crude from Iraq in six months in May, when OPEC’s second-biggest producer was negotiating with the group’s other members to persist with supply constraints to shore up the global market.

Tankers loaded 122 million barrels of Iraqi crude at ports in the Persian Gulf and Mediterranean Sea last month, according to vessel-tracking and shipping agent data gathered by Bloomberg. The daily outflow of 3.93 million barrels was just shy of the record, set in November, and exceeded that of October, the baseline month for cuts by the Organization of Petroleum Exporting Countries, Bloomberg reported. 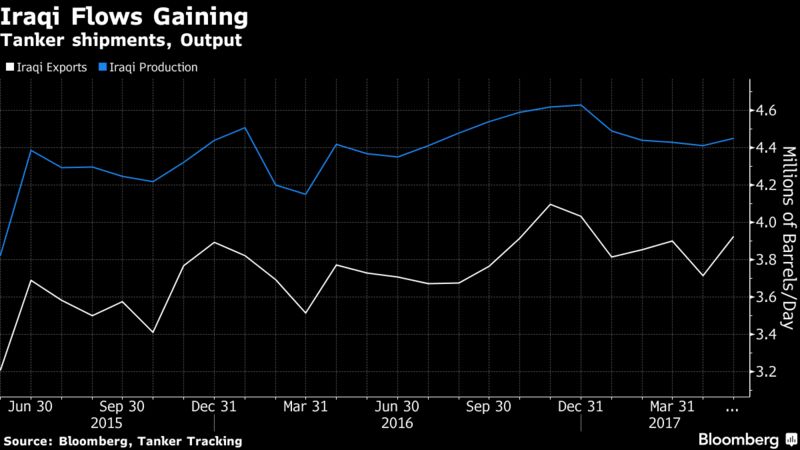 Ambitious goals to keep expanding its output capacity, coupled with an economy that’s still reeling from decades of bloody conflict, mean Iraq is among the most closely monitored nations for compliance to OPEC’s curbs. Along with Russia and other non-member oil suppliers, the exporter club is seeking to shrink a crude glut that’s holding prices at about $50 a barrel, less than half where they were three years ago.

“Iraq is the big one in terms of growing production and not having too much inclination to cut,” said Robin Mills, head of Dubai-based consultancy Qamar Energy. “Out of the OPEC members, it’s the one to watch.”

The country’s state oil marketing company, known as SOMO, sells crude via the southern port of Basra in the Persian Gulf as well as through a pipeline to Turkey. The semi-autonomous Kurdistan Regional Government independently ships oil that it produces at fields in the north of the country via Turkish ports. The flows captured by tanker tracking are for both.

Exports from neighboring Iran also surged in May, reaching 2.2 million barrels a day, compared with 1.82 million in April, according to ship-tracking data compiled by Bloomberg. Shipments from Libya, unbounded by OPEC restrictions, are at a 2 1/2 year high.

OPEC’s production limits took effect in January, initially for a period of six months, with OPEC and partners agreeing May 25 to another nine months of reductions. While it could be because of extra output, Iraq’s gain in May can also be explained in part by catching up on reduced flows in April, when a damaged jetty was under repair.

Iraq agreed in the OPEC deal to cut output by 210,000 barrels a day from its October level. While exports are not a perfect match for output, the market watches them closely to get an idea of production. Iraq doesn’t have the same capacity to store crude as some other producer nations, meaning that what’s pumped out of the ground is piped relatively quickly onto ships.