Speaking just hours before the ECB begins its self-imposed quiet period ahead of next week’s monetary policy meeting, Weidmann said the strengthening recovery makes it increasingly likely that the rise in the inflation rate isn’t “just a flash in the pan.” Inflation would still accelerate more than in the previous years even if some of the stimulus were removed, he said, adding the ECB should consider the impact of its policies on bank profitability, Bloomberg reported.

“In my view, the current economic outlook together with the improvement in the balance of risks suggests that the Governing Council is beginning to discuss whether and when it will be time to adjust our forward guidance,” Weidmann said in a text of a speech in Constance, Germany, on Wednesday. If the economic outlook changes, “this will eventually have to be reflected in our forward guidance.”

Comments from Weidmann, one of the most outspoken critics of the central bank’s loose monetary policy, set the stage for a potentially heated discussion when ECB officials gather in Tallinn on June 8. President Mario Draghi has tried to downplay expectations that the Governing Council will do much more than acknowledge the latest economic progress next week.

Data in the past two days has highlighted the divergence between economic growth and inflation. Consumer-price growth in the currency bloc slowed to 1.4 percent from 1.9 percent in May. Core inflation, which strips out volatile elements like energy and food, decelerated to 0.9 percent from 1.2 percent. That bolsters Draghi’s case. 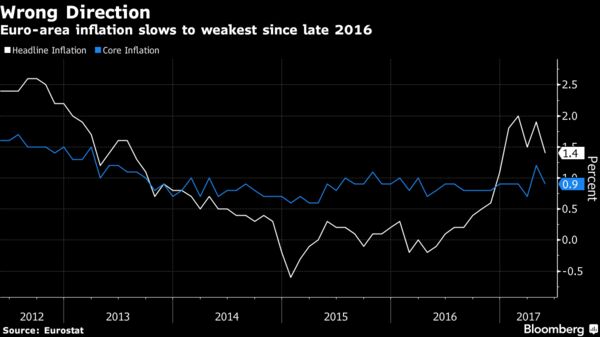 Yet data on Wednesday showed unemployment sliding to the lowest level since March 2009. While the ECB sees the rate of 9.3 percent as reflecting economic slack that will still weigh on wages and prices, a purchasing managers survey published on Thursday showed private-sector manufacturers hiring at a record pace and output at a six-year high.

A separate report showed Italy’s economy, the region’s third-largest, grew twice as fast as initially estimated last quarter. The expansion of 0.4 percent was the strongest since the end of 2010.

Weidmann’s words are broadly in line with comments earlier in the day by the Governing Council’s other German member.

“When the situation changes in a clear and not just temporary way, then forward guidance should also change,” Executive Board member Sabine Lautenschlaeger said in a speech in Berlin. “All ingredients for an appropriate increase in prices are present. Against that backdrop, we should prepare to slowly reduce the dose of monetary medicine.”

The ECB’s current guidance says the central bank will keep interest rate at the current or lower level well past the end of its asset purchases, which are set to run at their current pace of 60 billion euros ($67 billion) per month until at least the end of this year.

Weidmann said the bond-buying program has boosted euro-area inflation, even if it is hard to gauge exactly by how much. Bundesbank’s models suggest quantitative easing added from 0.1 to 2.5 percentage points to inflation after two years.

In any case, Weidmann said that inflation doesn’t always have to be in the ECB’s “target range” of just below 2 percent since its definition of price stability is “a medium-term, forward-looking concept.”

“Given the long and variable time lags in monetary policy, we do not fine-tune the inflation rate,” Weidmann said. “These lags are sometimes shorter and other times longer. And in the current situation in which we are still in the aftermath of a financial crisis, this lag is probably longer.”