EghtesadOnline: U.S. stocks limped into the weekend on a sluggish final day of trading, while the dollar fluctuated with oil as investors assessed data showing the U.S. economy on firm footing.

The S&P 500 Index fluctuated between gains and losses before closing higher by less than a point -- good enough for a seventh straight gain and fresh record in trading 25 percent below the 30-day average. The dollar capped a weekly advance as a second reading on gross domestic product topped estimates. Crude headed for a weekly loss after OPEC’s move to prolong supply cuts for nine months disappointed investors hoping for more. The pound fell as a poll showed U.K. Prime Minister Theresa May losing ground to her main opponent ahead of next month’s election, Bloomberg reported. 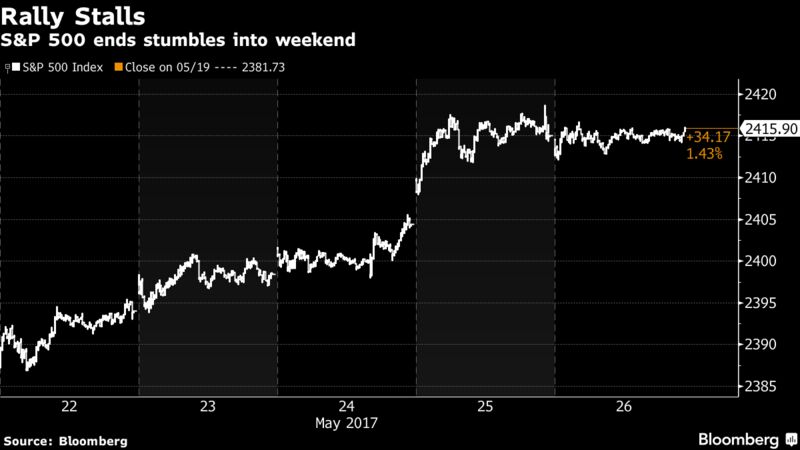 Action was subdued ahead of a three-day weekends in the U.S. and the U.K. A second straight month of stagnant orders for business equipment in April indicated investment in capital goods could slow in the second quarter, paring weekly gains in U.S. stocks. Crude languished below $50 a barrel, while U.K. investors awakened to election risk after a poll showed the Conservative party lead narrowed after the Manchester attack.

“Markets ultimately found the renewed deal among OPEC and friends underwhelming,” Cole Akeson, a strategist at Sberbank CIB in Moscow, wrote in an emailed note. “Essentially, the market consensus seems to have come around to a view that regardless of what effect on global inventories the deal may have for now, OPEC and its partners have little insight as to what to do later on.”