EghtesadOnline: Iran’s oil industry bounced back from sanctions last year, cranking up output to recover market share from other OPEC producers. Now that its surge has topped out, Iran supports an extension of the group’s cuts to preserve those gains.

Oil Minister Bijan Namdar Zanganeh’s willingness to embrace a deal that leaves Iran room to pump about 3.8 million barrels a day signals the country is already producing near capacity, according to analysts from BNP Paribas SA and Energy Aspects Ltd. The Organization of Petroleum Exporting Countries is expected to extend curbs by nine months at a Vienna meeting this week, Bloomberg reported.

“We do not have any problem between six or nine months,” Zanganeh told reporters Wednesday in Tehran, referring to two different scenarios for a possible extension.  “We will go along with what the majority agrees with.” He added that “there has been no hint regarding a cutback in production by Iran as of now,” when asked if other OPEC members have requested the country to trim output under a renewed deal.

Oil producers are struggling to shore up markets after a global supply glut sent prices tumbling, with Saudi Arabia and Russia proposing that their 24-nation alliance prolong output limits beyond June and into the first quarter of 2018. Iran insisted on and won an exemption from the cuts that took effect in January and has since pumped just below its cap -- unable to produce much more even if it wanted to. 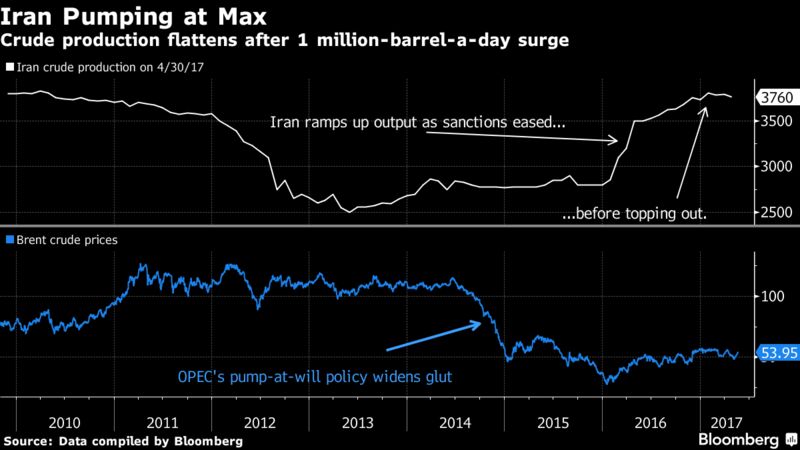 “Iran, knowing that its production capacity is limited anyway over the next year or so, is happy to go along with the status quo,’’ Harry Tchilinguirian, a commodities analyst at BNP Paribas in London, said by phone. “Iran is not the stumbling block.”

OPEC will meet Thursday in the Austrian capital to consider extending output cuts to clear a global oversupply. It resorted to setting limits last year after benchmark Brent crude plunged to less than half its 2014 high of more than $115 a barrel. Brent has averaged about $54 a barrel since the end of November when OPEC members agreed to quotas.

“The Iranians clearly have big ambitions for their oil industry, but they’ve made slow progress,” said Richard Mallinson, an analyst at Energy Aspects in London. The Persian Gulf country boosted output and exports after international sanctions were eased in January 2016, but its production capacity is stuck at about 3.8 million barrels a day, he said. “Technically, they’re going to struggle to lift crude production above that level until the effect of foreign investment starts to be felt.”

Most international oil companies held off from investing in Iran before the May 19 elections that confirmed Hassan Rouhani as president for a second term. Rouhani hasn’t indicated yet which cabinet members will keep their jobs, including Zanganeh, the oil minister.

Iran boosted output by about 800,000 barrels a day last year, according to the U.S. Energy Information Administration, recouping some of the sales it lost to rivals while shackled by sanctions. The Islamic Republic increased its share of OPEC’s total sales to 8 percent, on a par with what it had prior to sanctions, data from the EIA show. It’s now the group’s third-largest producer after Saudi Arabia and Iraq.

Exports have more than doubled to about 2.5 million barrels a day since restrictions were eased, Zanganeh told reporters on May 6. Tanker-tracking data also show crude shipments rising but at a slower rate, to 1.8 million. If other producers keep trimming their output under an extended cuts agreement, Iran should be able to protect its enlarged slice of the market.

Iran pumped 3.76 million barrels a day in April, down slightly from January when it produced 3.8 million -- the most since April 2010, data compiled by Bloomberg show. The country needs to keep spending if it wants to maintain output at such levels.

“If Iran doesn’t succeed in attracting investment, the natural pressure drop of its mature field will be a major hurdle for sustaining production at the current level,” said Sara Vakhshouri, president of Washington, D.C.-based consultant SVB Energy International LLC.

Projects that the state oil company is developing by itself will keep output steady for at least six months, but Iran will need foreign expertise to tap new reservoirs, said Robin Mills, who previously worked in the country as a geologist for Royal Dutch Shell Plc and now runs Dubai-based consultant Qamar Energy.

While the U.S. extended sanctions relief for Iran earlier this month, President Donald Trump excoriated the government’s alleged financing of terrorist groups during a visit to Saudi Arabia on May 21. Trump said in a speech to leaders of predominantly Muslim nations that Iran should be isolated until it actively supports peace. Rouhani dismissed the meeting in Riyadh as a “show without political value,” speaking at a Monday news conference.

Rancor between regional rivals Saudi Arabia and Iran won’t stop Tehran from supporting the Saudi-backed extension of output cuts, according to Fabio Scacciavillani, chief economist at the Oman Investment Fund.

“You need to look at each country’s interest, not its words,” Scacciavillani said in an interview in Dubai. “Where the Saudis and Iranians’ interests converge is in giving support to oil prices by maintaining the production cuts.”