EghtesadOnline: OPEC and its allies came one step closer to agreeing to extend their oil supply deal after a ministerial committee recommended another nine months of cuts.

According to Bloomberg, the Joint Ministerial Monitoring Committee -- composed of six OPEC and non-OPEC nations -- agreed in Vienna on Wednesday to support an extension through March 2018, according to two delegates familiar with the matter, who asked not to be identified because the meeting was private. That added to the public backing for another nine months of cuts from the most influential participants in the deal, including Russia, Saudi Arabia and Iraq.

"I think we almost all agree on nine months,” Algeria’s Energy Minister Noureddine Boutarfa said in an interview in Vienna on Wednesday, prior to attending the committee meeting.

The Organization of Petroleum Exporting Countries and 11 non-members agreed last year to cut output by as much as 1.8 million barrels a day. The supply reductions were initially intended to last six months from January, but the slower-than-expected decline in surplus fuel inventories prompted the group to consider an extension. U.S. crude futures have rebounded by about 13 percent from a five-month low since Saudi Arabia first proposed maintaining the curbs into 2018. 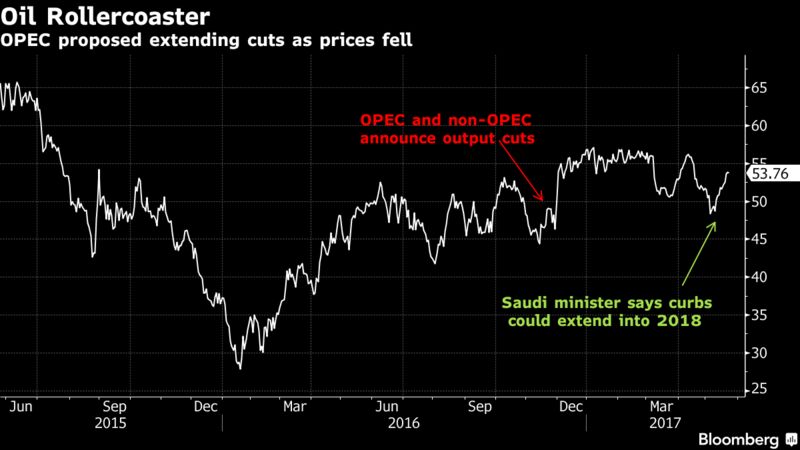 Venezuela, Russia, Saudi Arabia and Algeria -- all members of the committee -- had already said they favor continuing the supply cuts through March 2018. Oman said prior to the meeting that it wasn’t opposed to nine months, but wanted more discussion before giving its support. Kuwait, the panel’s sixth member, said they would also discuss a 12-month extension.

You can follow our TOPLive blog on the OPEC meeting in Vienna on Thursday here.

Oil officials from the 24 nations participating in the deal meet in the Austrian capital Thursday to finalize their agreement. Kazakhstan presents one potential complication to those talks.

The third-largest non-OPEC participant in the agreement pumped 1.76 million barrels a day in April, overshooting its target of 1.68 million, OPEC estimates show. The country’s Energy Minister Kanat Bozumbayev said he will seek to renegotiate the cap on its output before agreeing to an extended deal.

OPEC and its allies will probably agree to prolong their agreement until the end of the first quarter of 2018, Gary Ross, global head of oil at PIRA Energy Group, part of S&P Global Inc., said in an interview in Vienna on Wednesday.

The crude market is now starting to rebalance in earnest, but it will take time and the bulk of stockpile draws will come between June and September, Ross said. OPEC will achieve its stated aim of bringing fuel inventories back in line with the five-year average by the end of this year, said Venezuelan Oil Minister Nelson Martinez.