EghtesadOnline: Crude oil climbed toward $51 a barrel and Asian stocks advanced, helped by a rise in energy producers amid speculation cuts to crude supplies will be extended further. The yen declined after a volatile week for financial markets.

Stocks from Sydney to Hong Kong rose, with energy and raw-materials shares posting the biggest moves on the MSCI Asia Pacific Index. Saudi Arabia’s energy minister said all producers participating in a deal to limit output agree on extending the cuts by nine months. The won surged even after North Korea conducted another ballistic missile test on Sunday. The pound fell as the U.K. threatened to exit talks on its departure from Europe.

According to Bloomberg, global equities are close to a record as investors bet global growth can withstand political turmoil in the U.S. and Brazil, as well as further increases in interest rates. Money managers will be scrutinizing minutes released this week from the Federal Reserve’s latest meeting, with a more than 80 percent chance that rates will go up again next month. 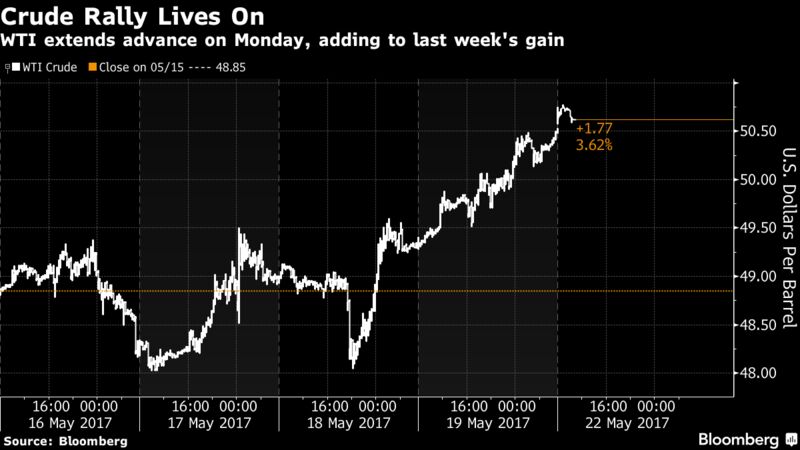 The Republican chairman of the House Oversight and Government Reform Committee said he’ll talk to James Comey on Monday and is pursuing any records of President Donald Trump’s meetings with the fired Federal Bureau of Investigation director. Trump continues his trip in the Middle East, where U.S. companies signed multi-billion dollar deals in the defense, energy and infrastructure industries.

“With Trump on a tour, the hope is we see less news over the next couple of days -- a chance for the waters to settle,” said Andrew Sullivan, a managing director for sales trading at Haitong International Securities Group Ltd. in Hong Kong. “It’s another overhang on the market. We’ve got all these markets trading at highs and people don’t want to miss out, but they don’t want to be caught out.”

In Brazil, President Michel Temer suffered a setback in trying to fend off allegations of corruption and cover-up after the country’s influential bar association voted in favor of his impeachment. The controversy sparked the biggest weekly selloff on the country’s benchmark equity index in five years.

Here are the key events investors will be on the lookout for: