The S&P 500 Index cut its gain by almost half after news emerged that investigators are focusing on a current White House official as a person of interest in their probe of Russian influence on the election, intensifying the political turmoil that’s gripped Washington for weeks. The 10-year Treasury note all but erased an advance, while the dollar held its worst slide since March. Gold capped its best week in a month, Bloomberg reported. 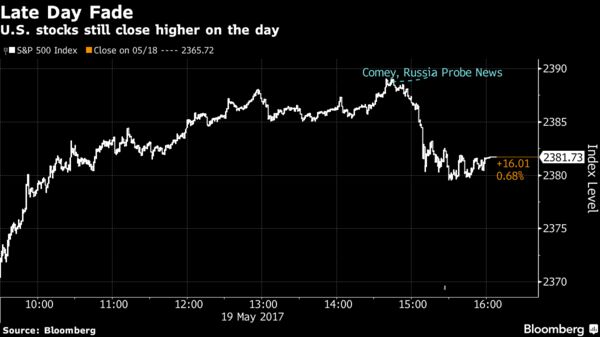 The reports rekindled concern that Trump’s political woes will ensnare the administration’s plans for tax cuts and infrastructure spending, concern that on Wednesday sent the S&P 500 to its biggest loss of the year. Markets had been mostly sanguine about developments in Washington until then, with the equity benchmark reaching a record Tuesday.

Nerves had calmed in the ensuing days, with the S&P 500 Index almost erased a loss for the week earlier Friday amid strong corporate results and a rally that took crude above $50 a barrel. Risk sentiment was also helped by better-than-expected U.S. jobless claims and regional manufacturing data Thursday.

What investors will be watching:

Here are the major moves in the markets: