EghtesadOnline: While Japan’s failure to spur inflation continues to generate angst about the nation’s future, gross domestic product data this week is likely to show that the economy has still managed to eke out five straight quarters of expansion.

That would be the best run since 2006, during Japan’s last period of political stability under the leadership of then-Prime Minister Junichiro Koizumi, according to Bloomberg.

Thanks to a strong showing from exporters -- aided by a yen that’s back at the more competitive levels of a decade ago -- Shinzo Abe’s government is set to better Koizumi’s run later this year. 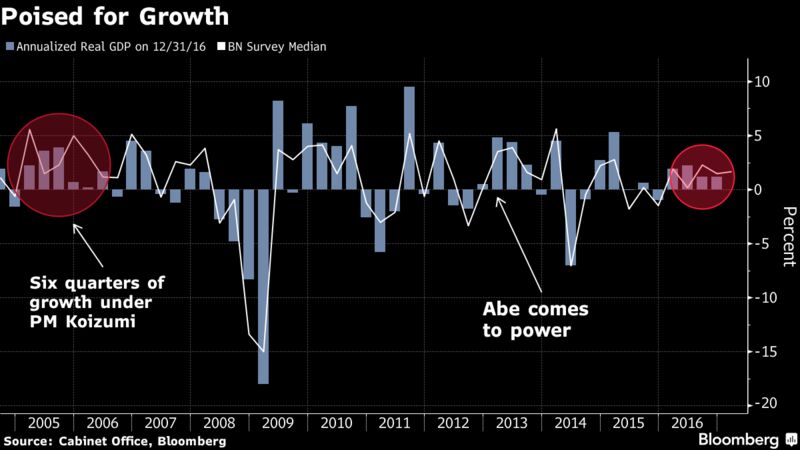 Whether or not increases in consumer prices take hold won’t be known until much later in 2017, with a lot riding on expectations for higher energy costs and hopes for higher wages, which would encourage household spending and allow retailers to charge more for their wares.

All this is needed to create the kind of GDP growth and inflation for Japan to manage its huge debt burden.

For the next few quarters, though, Japan is on course to get modest economic expansion without much in the way of inflation.

Forecasts compiled by Bloomberg for the GDP report due on Thursday morning call for:

“Japan looks to have had a good start to 2017, with first-quarter growth clearly exceeding the potential growth rate,” said Yoshiki Shinke, chief economist at Dai-Ichi Life Research Institute in Tokyo. “Things are promising going forward because exports are likely to stay solid and capital spending and public investment may pick up. But the recovery will likely be led by the corporate sector and households may not spend much.” 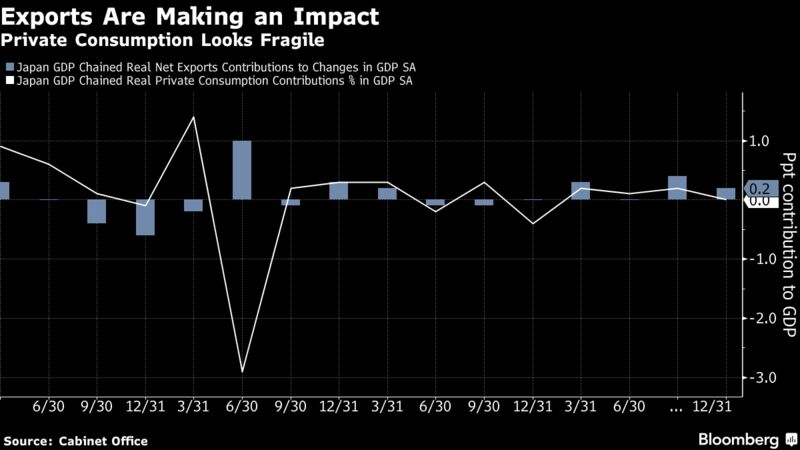 The Bank of Japan last month upgraded its economic growth forecast slightly -- to 1.6 percent in the current fiscal year ending in March 2018 -- while trimming its inflation projection for the period to 1.4 percent. The central bank sees global demand supporting the uptrend in exports and production.

He said there is a chance that the government may compile a small economic spending package around winter as the effects of last year’s fiscal stimulus fade, but there is little likelihood of any change in the central bank’s monetary policy.

Marcel Thieliant, senior Japan economist at Capital Economics in Singapore, said people may ask whether the BOJ’s failure to lift inflation to 2 percent really matters if GDP is expanding.

"As long as conditions remain healthy, it probably doesn’t," he wrote in a note this week. "But if inflation is still low when the next downturn hits, both monetary and fiscal policy makers will find their ability to respond constrained."