Markets Are Doing Nothing, and Investors Have Nowhere to Hide

EghtesadOnline: It doesn’t pay to worry about the unprecedented market calm. As U.S. stocks trade at fresh highs and volatility across assets is so subdued it’s touching near-record lows, hedging seems like a luxury. It’s getting harder to justify coughing up money for cheap protection that ends up seeming overpriced in the face of rare, and quickly reversing, selloffs.

With the French election out of the way, investors have stopped paying what had been a five-month high in the cost of insuring against declines in the S&P 500 Index. The price of hedging against a 5 percent drop in the gauge over the next month is 36 percent below it’s five-year average. Meanwhile the Bank of America Corp.’s Skew Index, which measures demand for hedging against large swings in global equities and currencies, is it’s lowest since 2013, according to Bloomberg. 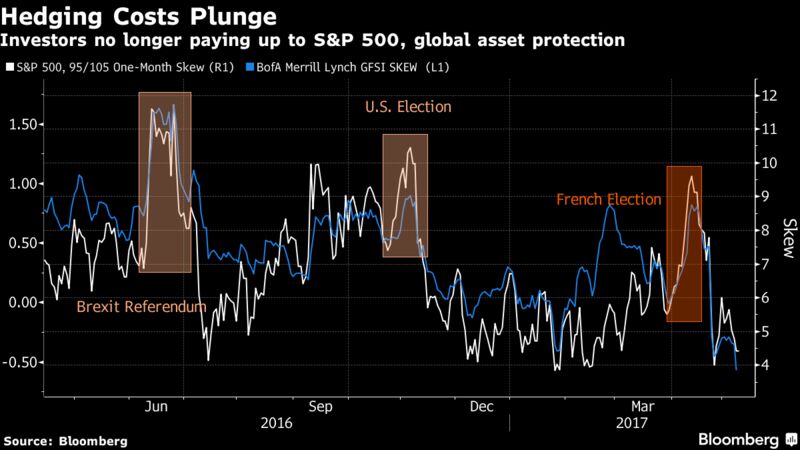 For some, this sense of calm in the market is anxiety-inducing in its own right, especially as valuations stretch to levels not seen since the aftermath of the 1990s internet bubble.

“It looks to me that the configuration of assets prices aren’t quite ready for a shock,” Kevin Warsh, a former Federal Reserve governor, said at the Sohn Investment Conference on Monday. “I would not take comfort, I would take fear.”

Warsh isn’t alone in his concern that investors are under-prepared for a shock. Julian Emanuel, executive direction of U.S. equity and derivatives strategy at UBS Group AG, says that “people are definitely under-hedged,” considering that cheap options are rarely paying off. Still, others are getting more creative about hedging.

One reason the options market isn’t the site of a lot of hedging may be that using it doesn’t pay. A study published in March by Roni Israelov of AQR Capital Management found that simply keeping a chunk of your portfolio in cash achieved the same results as employing a 5 percent put protection strategy, with much smaller losses and volatility.

Here’s how some people are choosing to hedge their exposure:

Long End of the VIX Curve

The front end of the VIX futures curve keeps sinking lower as the VIX Index trades below 10, it’s lowest level since 1993. For traders, going long volatility has been punishing, as the falling VIX spot drags down short-term futures.

However, moving further out on the VIX curve there’s still a bid for September futures. And it’s one that Macro Risk Advisors’ Pravit Chintawongvanich likes. On the long-end, investors can buy contracts that are less exposed to decay from time and more exposed to volatility risks, he said. 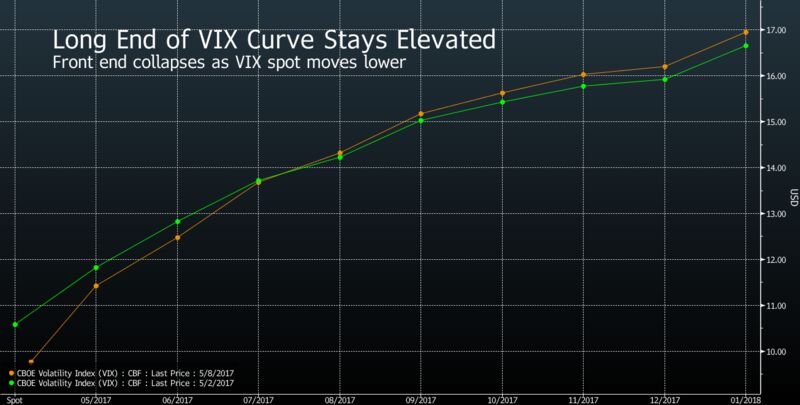 “Over the next four-to-five months, there is a good chance to monetize these long-dated VIX futures,” Chintawongvanich wrote in a note to clients Monday.

Though not a hedge per se, overweighting stocks that aren’t sensitive to gyrations in the U.S. economy helps protect against the “red flag” of market complacency, said Howard Ward, chief investment officer of growth equities at Gamco Investors Inc., which oversees nearly $40 billion. 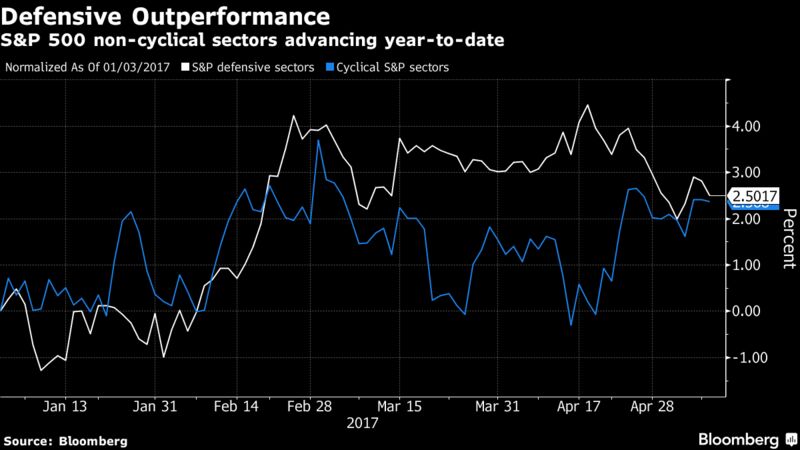 “It has been a long time since we had a 5 or 10 percent correction, and the clock is ticking,” Ward said. “Earnings estimates for this year are too aggressive, and the consumer is saving more, spending less, and consumers represent 70 percent of the economy.” 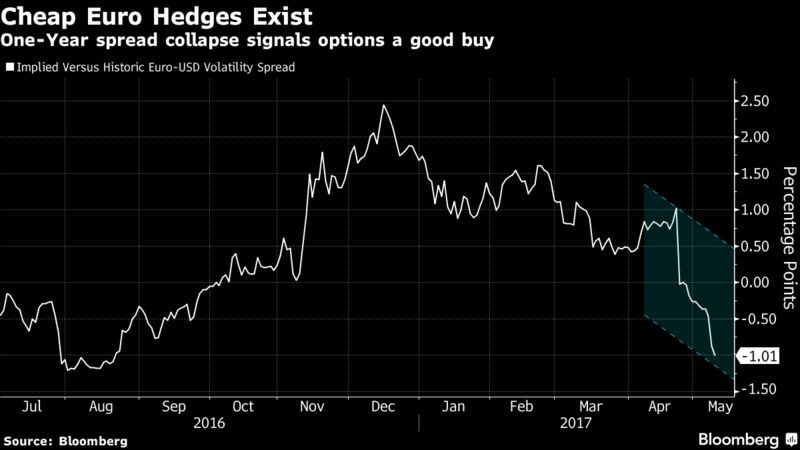 Implied volatility on one-year options on the euro-U.S. dollar exchange rate is 7.2 percent, or a percentage point below a gauge of actual swings in the currency over the past 12 months, now at 8.2 percent. Over the past five years, that spread, a metric strategists look at to measure if options are cheap or expensive, has had actual volatility exceed implied by 0.35 percentage points.

“We continue to think that Europe has substantial challenges ahead of it,” Curnutt said. “It’s rare to be able to buy an option with implied volatility below the realized.”

While traders may not be actively using options to buffer against currency swings, they are still hedging against risk, said Neil Jones, head of hedge-fund sales at Mizuho Bank Ltd. in London. Wagers that profit if the British pound slides versus the dollar are a prime example, he added. 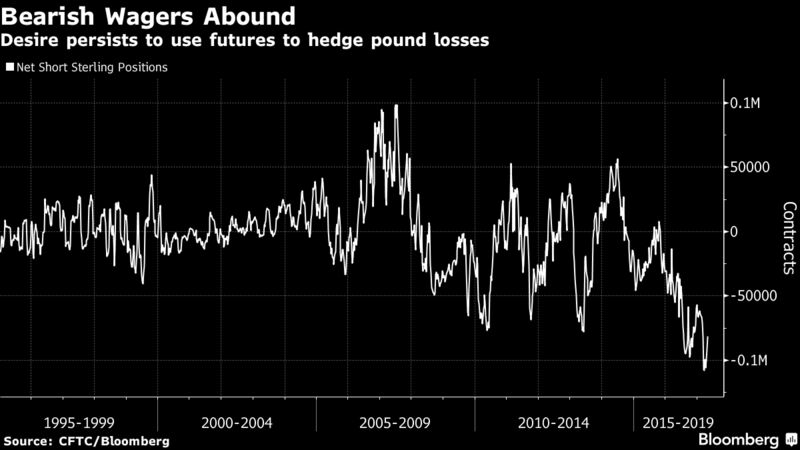 Large speculative investors, including hedge funds, are net short pound futures against the dollar by 81,364 contracts as of May 2, according to the Commodity Futures Trading Commission. That’s close to the record bearish wagers reached in March.

Since UBS’s Emanuel believes stocks are unlikely to move materially higher, he said a hedge called a stock replacement makes sense. In this trade, instead of holding a long position in a stock, traders pay a premium for a limited downside by buying a call option. That way, they can benefit from any move higher, but the actual amount of cash at risk is lower because the options are cheaper than the shares. 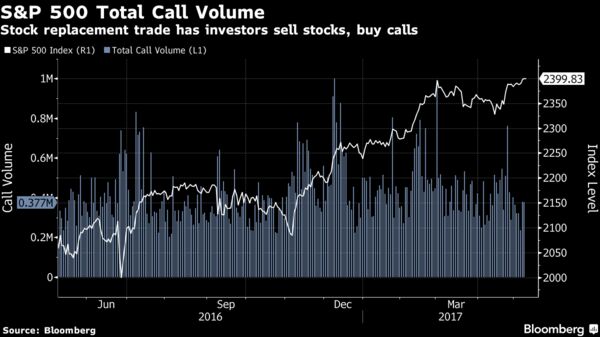 “The cool thing about hedging at this level is that the VIX could rise 30 percent off of nothing. From that perspective, hedging is cheap and stock replacement makes sense,” said Emanuel. “If the economic numbers don’t strengthen materially in the coming weeks, we think people will take a closer look.”

financial markets US stocks US investors US markets