EghtesadOnline: OPEC’s plan to boost oil prices by cutting production has fizzled, yet it has little choice but to stick with it.

Crude has surrendered all of its gains since the Organization of Petroleum Exporting Countries first agreed production cuts in November. While the group has implementedthe curbs, a rebound in U.S. shale output and stubbornly-high stockpiles show the world’s three-year crude glut isn’t shifting. Even signals from Saudi Arabia and Russia that they’ll prolong the supply reductions haven’t staunched the rout, according to Bloomberg. 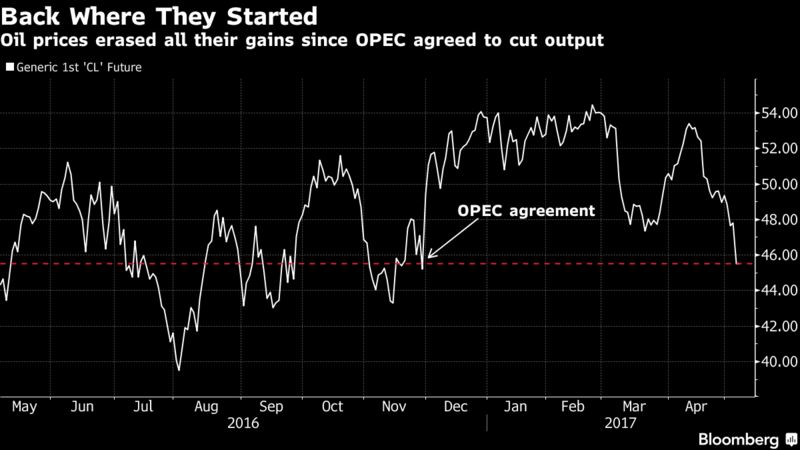 Yet OPEC has limited room for maneuver when it meets on May 25 in Vienna to discuss the deal, and is almost certain to persevere because the alternatives look even worse. If it were to deepen the cutbacks, even more shale supplies might come along to fill the gap, according to UBS Group AG. Abandoning the policy and restoring output would inflict the economic pain of crude below $40, Citigroup Inc. predicts.

“The risk of a higher cut is that it could trigger too strong an increase in prices and support U.S. shale,” said Giovanni Staunovo, an analyst at UBS in Zurich. “If they change strategy, Saudi Arabia would lose face. You can’t say you want lower inventories, and after a few months give up.”

The selloff came even after a statement from Russian Energy Minister Alexander Novak that his country was “inclined toward” an extension of production cuts into the second half. He was echoing his Saudi counterpart Khalid al-Falih, who said on April 26 that there’s a preliminary consensus to prolong the agreement with backing from other OPEC nations such as Kuwait and Iraq.

With OPEC already showing near-perfect compliance in delivering its pledged 1.2 million barrel-a-day production cut and an extension looking likely, the group has little ammunition left in its battle to raise prices.

“The OPEC deal was doomed to failure from the very beginning,” said Eugen Weinberg, head of commodities research at Commerzbank AG. “If they deepen the cut, the effect will be short-lived. OPEC will find itself in the same position again in six months time, but non-OPEC would get more market share by then.”

While the International Energy Agency still predicts a rapid reduction in the supply glut in the second half of this year if OPEC maintains its cuts, data available right now show few signs of success.

Global fuel stockpiles may have actually increased during the first quarter, the IEA estimates. In the U.S. -- the world’s biggest consumer -- crude inventories are dropping, but remain near record levels. Meanwhile, American production has roared back, growing by 523,000 barrels a day this year to the highest level in almost two years as investment returns, according to the Energy Information Administration.

There’s a sense of “dejection” in the market that the cuts aren’t working, but OPEC can still succeed if it stays the course, according to Energy Aspects Ltd.

“We still think the market does rebalance by the end of this year as long as OPEC continues its production cuts,” Amrita Sen, chief oil analyst at the London-based consultant, said in a Bloomberg television interview. “I don’t think they have many options.”