EghtesadOnline: The Chinese and U.S. stock markets are going in opposite directions. An intensifying crackdown against leverage in Asia’s biggest economy has rocked the hither-to unflappable Shanghai Composite Index over the past week, sending it to a three-month low last session. In the U.S., the largest equity market is embracing a risk rally spurred by the French election, with the S&P 500 Index continuing to build on reflation-trade gains ignited by Donald Trump’s November victory.

The divergence means the two markets are the least in tune since August 2008 -- just before the collapse of Lehman Brothers Holdings Inc. unleashed chaos on the global financial system, according to Bloomberg. 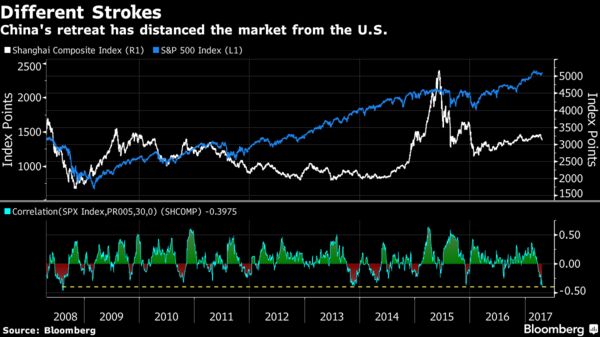 Chinese officials have mainly kept mainland stocks on a tight rein after routs in mid-2015 and the start of 2016 reverberated through world financial markets. Until Monday’s 1.4 percent slump, the Shanghai Composite Index hadn’t fallen more than 1 percent for 86 trading days.

As Beijing’s focus on reducing risk in the financial system shifted from money-market tightening and reducing leverage to containing speculation and irregular trading, the two markets starting moving in opposite directions in the past month.

In one sense, it’s a sign that investors overseas aren’t as worried about Chinese market ructions as they were in previous years -- perhaps partly thanks to underlying strengthin China’s economy. Given how mainland stocks have become increasingly linked to global markets, however, the divergence may prove to be a short-term phenomenon, according to Daniel So, a strategist at CMB International Securities Ltd. in Hong Kong.

“The Chinese government is squeezing speculation out of the market and while investors adjust, it will inevitably lag behind other parts of the world," So said.

For now, the split with the U.S. is particularly marked, with the Shanghai Composite’s 30-day correlation with the Bank of New York Mellon index of Chinese American depository receipts approaching zero. The Chinese ADR market -- dominated by technology companies like Alibaba Group Holding Ltd. -- has climbed 8.6 percent since Trump was elected U.S. president, while the state-company-led Shanghai Composite is down 0.6 percent. 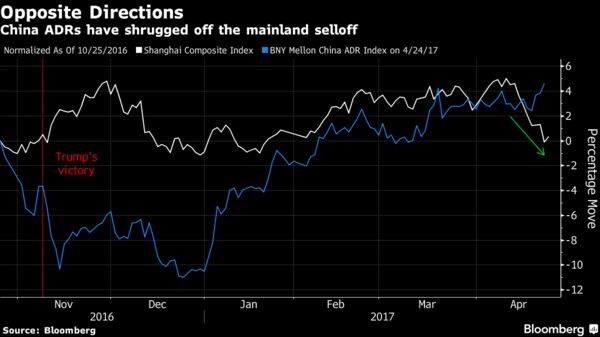 China’s deleveraging drive and the renewed focus on market irregularities have put the mainland share market into a “bad mood,” but officials aren’t likely to tolerate a lot of instability ahead of the Communist Party’s twice-a-decade leadership reshuffle later this year, said George Magnus, a former adviser to UBS Group AG and current associate at the University of Oxford’s China Centre.

“The authorities are trying to calm down leverage and housing at the margin but will not go any further than the minimum necessary,” he said. “If it looks as though regulatory tightening is delivering unfavorable outcomes, and risks any form of instability, you won’t be able to say the world ‘backtrack’ fast enough.”

As long as growth remains stable, though, the regulatory moves may continue. That would be good for the economy over the longer term, said Alex Wolf, a Hong Kong-based senior emerging markets economist at Standard Life Investments Ltd. "Successful efforts at deleveraging and reducing credit to nonbank financial institutions can reduce overall systemic risk."

Two months ago, Chinese markets were a picture of calm, with mainland stock volatility near the lowest since 2014 and bond yields falling as money-market rates subsided. Tuesday, the Shanghai Composite closed up less than 0.2 percent, after sinking 2.3 percent last week.

For Adrian Zuercher, head of Asia Pacific asset allocation at UBS’s private banking arm in Hong Kong, the weaker relationship between Chinese shares and other markets is a good thing, and is likely to become more marked.

“All these regulations that are taking place are done in a way that should make China less risky,” he said. “The economy is on a solid footing and that’s why they can do some of the measures. We will probably see more international investors coming into China on the fixed income and equity side.”