The Dow Jones Industrial Average reclaimed the 21,000 level as Caterpillar climbed more than 7 percent and McDonald’s rose 5 percent. The Nasdaq Composite Index topped 6,000 for the first time. Stocks in Europe rose to a 20-month high as risk appetite fueled by the outcome of France’s election continued. The yen fell with Treasuries and gold. The Canadian dollar tumbled after Donald Trump slapped a 24 percent tariff on imported softwood lumber, according to Bloomberg. 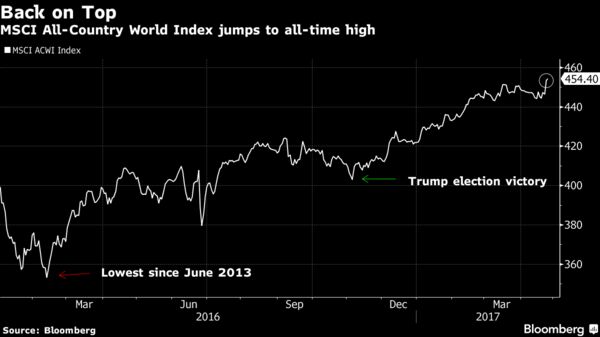 Investor focus shifted to the U.S. economy where corporate earnings and data on housing starts underpinned speculation that growth is poised to accelerate. Trump’s decision to impose a fresh tariff rekindled protectionist concern a day before his administration is set to unveil a broad outline for a reduction in corporate taxes. Shares in Europe rose as political risk abated, though tensions around North Korea continued to simmer.

“Attention will fast move over to Washington with the outline of the Trump tax plan likely tomorrow, the need to avoid the shutdown on Friday and the end of the first 100 days of Trump on Saturday” with the White House determined that higher growth can offset tax cuts, Jim Reid, a strategist at Deutsche Bank AG in London, wrote in a note.

Other events that may move markets this week: