EghtesadOnline: A relief rally amid speculation that pro-growth centrist Emmanuel Macron will become France’s next president was offset by a selloff in Chinese shares.

The euro jumped the most in a month, though the currency pared the steepest gains that came after Macron and far-right nationalist Marine Le Pen won the first round of voting. The yen retreated and volatility ebbed, with gold dropping and 10-year Treasury yields climbing. U.S. stock-index futures rose and Japanese shares led Asian equity gains. Shanghai shares tumbled the most since January amid heightened regulatory scrutiny, Bloomberg reported.

Investors have been anxiously viewing the French vote in the wake of last year’s Brexit referendum and Donald Trump’s victory in U.S. elections. The result, in which both establishment parties were eliminated, triggers a runoff on May 7 between two radically different visions of the country’s future. Le Pen, who wants to take France out of the euro and clamp down on immigration, has trailed Macron, a committed globalist, in almost every opinion poll for the runoff by a margin of some 20 percentage points.

“The market will likely fully price in the outcome of the second round today in favor of Mr. Macron,” said Jordan Rochester, London-based foreign exchange strategist at Nomura Holdings Inc. “If that view is right then Emmanuel Macron ought to be the next president of France. And that in turn should be positive for the French economy and for broader European economic stability.” 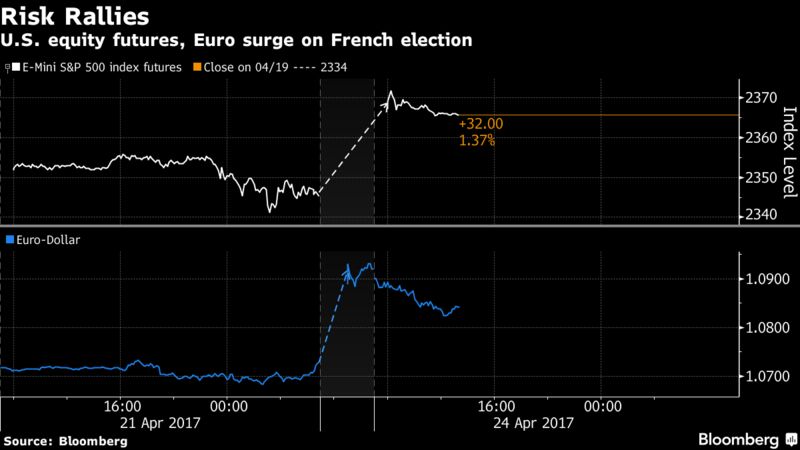 The selloff in Chinese stocks deepened as concern grows that authorities will step up measures to crack down on leveraged trading, as authorities take advantage of a strengthening economy to reduce financial-system risk. The banking regulator said Friday it will strengthen a crackdown on irregularities in the financial sector, echoing comments by the securities watchdog just days earlier.

What investors are watching beyond the elections: