Inflation took a surprising step back in March at the same time retail sales dropped for a second month, according to a pair of U.S. government reports on Friday. Labor Department data showed the consumer-price index fell a larger-than-forecast 0.3 percent, while a measure excluding food and energy fell by the most since 1982, Bloomberg reported. 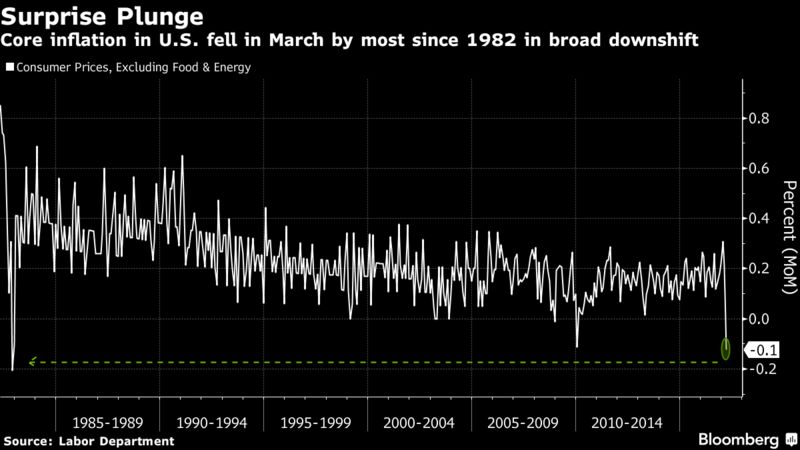 While the pullback at retailers underscores a weak first quarter for consumer spending that economists had already penciled in, the inflation data are what surprised them given recent signs that businesses had been able to regain pricing power. A further cooling of price pressures and modest household demand would raise questions about whether the economy could withstand a mid-year move by the Fed to lift borrowing costs.

“Both reports would be arguments in a case that a dove would make for why the Fed needs to be more patient,” said Stephen Stanley, chief economist at Amherst Pierpont Securities LLC. “It’s a relatively soft consumer performance in the first quarter, and you couple that with a pretty abrupt halt in the gradual uptrend in inflation. If I were a dovish policy maker, I’d say ‘what’s the harm in holding off a little bit and seeing how all this plays out.”’

That would make the June meeting more of a toss-up for a rate increase. As of Thursday, federal funds futures showed about a 57 percent chance that policy makers will raise their target rate for overnight bank lending. Financial markets in the U.S. were closed for Good Friday and the Easter holiday.

Retail sales were down 0.2 percent last month after a 0.3 percent drop in February that had previously been reported as a gain, Commerce Department data showed. Six of 13 major retail categories registered lower March receipts. At auto dealers, purchases fell 1.2 percent after a 1.5 percent slide a month earlier. 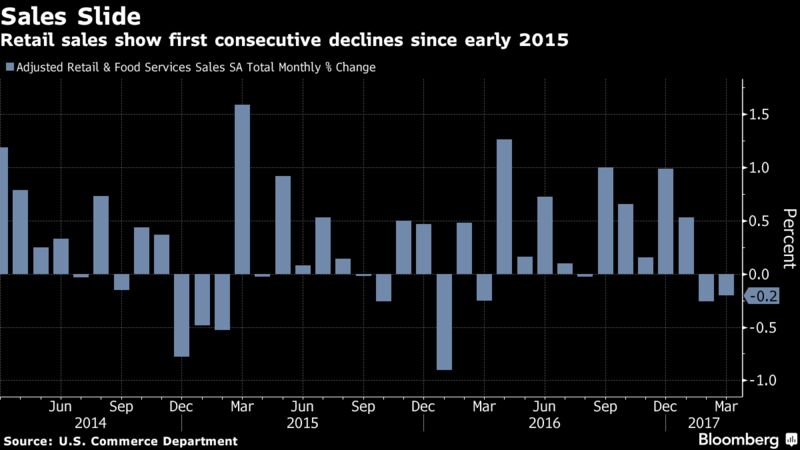 Low prices may have also played a role in restraining total sales as the retail figures aren’t adjusted to account for changes in inflation.

To be sure, two more months of economic data will be available before the Fed’s June 13-14 meeting. Spending, which accounts for about 70 percent of the economy, has room to pick up on the heels of steady hiring, healthier household balance sheets and more optimistic consumers. Income-tax refunds, which had been delayed earlier this year, may also provide a spark in the months ahead.

“The retail sales data are not adjusted for price changes which, as we have often noted, causes considerable misinterpretation of the underlying health of consumers,” Richard Moody, chief economist at Regions Financial Corp., said in a note after the report. “Ongoing improvement in labor market conditions, rising household net worth, and notably higher consumer confidence leave us with a much more constructive view of U.S. consumers than does the Q1 retail sales data.”

The decline in the CPI was the first in 13 months and was also broad, reflecting cheaper goods such as motor vehicles and gasoline, as well as a drop in the costs of services, including mobile-phone communications. The core CPI, which excludes energy and food, fell 0.1 percent.

Still, “we don’t think this is enough to cause the Fed to swerve from their stated desire to continue gradually increasing the funds rate, though it may embolden the doves’ rhetoric,” Michael Feroli, chief U.S. economist at JPMorgan Chase & Co., wrote in a note. “Until it gets reversed with stronger inflation data, today’s number will leave lingering doubts about the popular reflation narrative.”

Federal Reserve US inflation US interest rates US retail sales