EghtesadOnline: Oil advanced for a seventh day in New York, the longest gain since December, on confidence Saudi Arabia will support an extension to OPEC-led output cuts just as U.S. stockpiles show signs of shrinking.

Futures in New York were holding gains after rising 6.3 percent in the previous six sessions. Saudi Arabia is likely to back prolonging the curbs into the second half of 2017 in an effort to boost prices, according to a person familiar with the kingdom’s internal discussions. Several other countries, including Kuwait, have also expressed public support for an extension. Industry data was said to show U.S. crude supplies fell last week, Bloomberg reported. 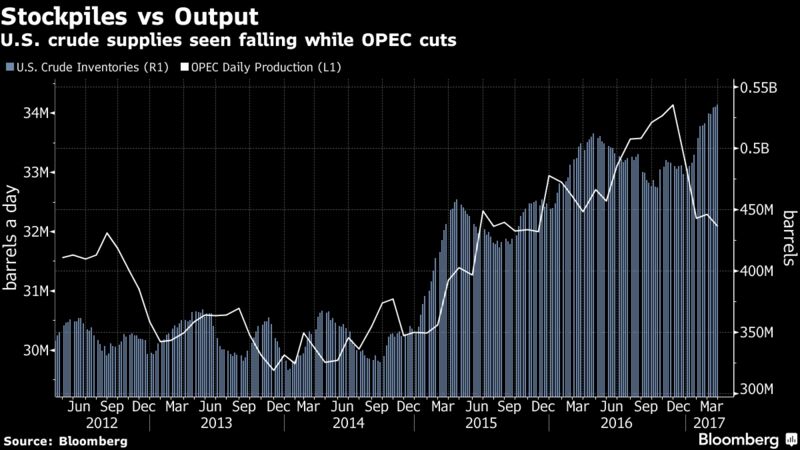 While speculation that the Organization of Petroleum Exporting Countries and its allies will extend their six-month pact aimed at eroding a global glut is helping boost prices, there’s also concern that rising U.S. output will counter the reductions. Saudi Arabia, the biggest OPEC producer, reduced supply below 10 million barrels a day in March, more than pledged under the deal, according to a separate person familiar with the matter. The group is scheduled to gather in Vienna on May 25.

“OPEC just has to have patience because the markets are rebalancing,” Abhishek Deshpande, chief energy analyst at Natixis SA in London, said in a Bloomberg television interview.

West Texas Intermediate for May delivery was at $53.64 a barrel on the New York Mercantile Exchange, up 24 cents, at 9:03 a.m. in London. Total volume traded was about 17 percent below the 100-day average. Front-month prices rose 32 cents to $53.40 on Tuesday, the highest close since March 1.

Brent for June settlement was 26 cents higher at $56.49 a barrel on the London-based ICE Futures Europe exchange. Prices increased 25 cents, or 0.5 percent, to $56.23 on Tuesday. The global benchmark crude traded at a premium of $2.48 to June WTI.

Saudi Arabia will decide on an extension depending on the stance of other OPEC nations such as Iraq and Iran, as well as Russia, which isn’t a member of the group but joined the output cuts, the person familiar with the kingdom’s internal discussions said. The world’s biggest crude exporter hasn’t made a final decision yet.

U.S. crude supplies fell by 1.3 million barrels last week, the American Petroleum Institute was said to report. Stockpiles probably dropped from a record high by 1.5 million barrels to 534 million barrels in the week ended April 7, according to a Bloomberg survey before an Energy Information Administration report Wednesday. Nationwide inventories have expanded by about 56 million barrels since the start of this year.