EghtesadOnline: The dollar rose with Treasury yields as investors reassessed the Federal Reserve’s signal that it intends to shrink its balance sheet. U.S. stocks fluctuated as administration officials discussed geopolitical uncertainty ahead of President Donald Trump’s meeting with his Chinese counterpart.

The S&P 500 Index erased gains in afternoon trading amid comments from Secretary of State Rex Tillerson on North Korea and Syria. The dollar rose versus the euro as Mario Draghi reaffirmed he is in no hurry to scale back stimulus. Crude topped $51.50 a barrel as investors speculated OPEC cuts would continue. Emerging-market assets slumped, Bloomberg reported. 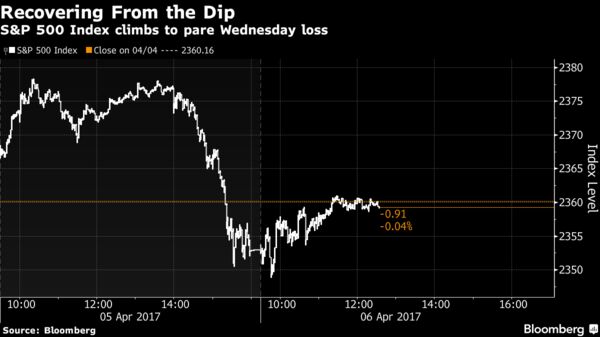 Trades sparked by the Fed’s talk about trimming its assets reversed Thursday, as investors turned attention to Washington for clues on the Trump administration’s policy priorities.

The president meets with Chinese President Xi Jinping with a chance to confront the leader of a nation he blames for stealing millions of U.S. jobs and enabling North Korea’s march toward a nuclear missile.

Republican efforts to revamp health-care look stalled before Congress takes a two-week recess, with investors focusing on Friday’s jobs report for clues on the strength of the economy absent any boost from lower taxes and higher spending.

What investors will be looking out for: