EghtesadOnline: Stocks in Asia rose as trading began in a busy week that includes a meeting between China President Xi Jinping and Donald Trump and culminates in the monthly U.S. jobs report.

Japanese equities nudged higher after a report showed an improving outlook among the countries’ largest firms. Stocks in South Korea, Hong Kong and Singapore also rose, after the best quarter for the region’s equities in five years. The euro climbed, after posting its first weekly decline since February. Markets in China and Taiwan are closed for holidays. Oil held last week’s biggest gain of the year, according to Bloomberg.

As the second quarter gets going, political developments threaten to cloud the improving global economic outlook. The first major data release showed confidence among Japan’s large manufacturers improved for a second consecutive quarter in the first three months of the year.

Last month’s Federal Reserve interest-rate increase and the prospect of tighter monetary policy later this year has failed to spur the greenback, which fell to a four-month low last month on concern President Donald Trump may struggle to steer his promised tax cuts through Congress.

“Investors will look to the economic data and minutes out from both the FOMC and ECB in the week ahead for the next clues,” said Michala Marcussen, Paris-based global head of economics at Societe Generale SA. “When it comes to risk sentiment, however, markets are likely to take their cue from the two-day meeting between President Xi and President Trump starting on Thursday in Florida with the U.S.-China trade deficit at the top of the agenda.” 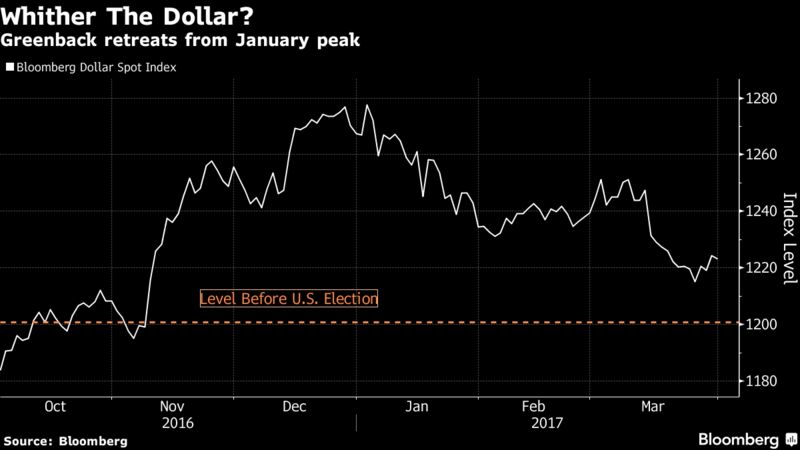