Libya’s output was said to fall to about 500,000 barrels a day after a pipeline carrying crude from the Sharara field -- its biggest -- stopped operating. Clashes between armed groups in the nation have previously led to market disruptions, and the latest news drove New York oil futures up as much as 1 percent after boosting them 1.3 percent on Tuesday. Prices are headed for two straight days of gains for the first time in more than a month, according to Bloomberg. 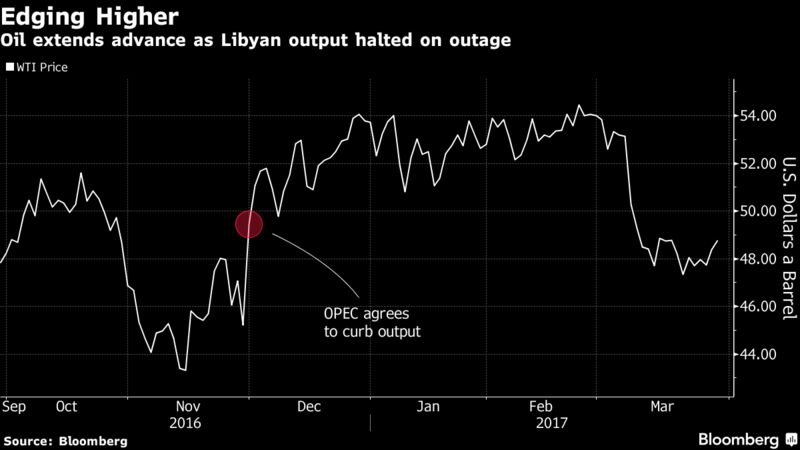 The production drop in Libya, which was pumping 700,000 barrels a day before the pipeline halt, is at least temporarily easing concern that rising U.S. supply is offsetting the effect of curbs by the Organization of Petroleum Exporting Countries and its allies. U.S. industry data on Tuesday was said to show crude inventories climbed last week, and a government report Wednesday is also forecast to show stockpiles expanded. Six OPEC nations have joined with non-member Oman to voice support for prolonging their output cuts past June.

“The global oil market is now in deficit because of production curbs by OPEC and Russia,” said Giovanni Staunovo, an analyst at UBS Group AG in Zurich. “For investors with a higher risk appetite, we regard current oil prices as a buying opportunity for outright long positions.”

Libya’s state-run National Oil Corp. was said to declare force majeure on loadings of Sharara crude from the Zawiya oil terminal and on loadings of Wafa field condensate from the Mellitah terminal. Force majeure is a legal status protecting a party from liability if it can’t fulfill a contract for reasons beyond its control.